The Unicorne Files 3: A Crown of Dragons review 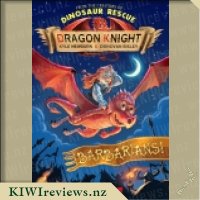 Disclosure StatementFULL DISCLOSURE: A number of units of this product have, at some time, been supplied to KIWIreviews by Scholastic (NZ) or their agents for the purposes of unbiased, independent reviews. No fee was accepted by KIWIreviews or the reviewers themselves - these are genuine, unpaid consumer reviews.
Available:
August 2016

Sometimes being half boy, half dragon gets really messy!

EWWW! What speaks in snorts and stinks like a corpse rotting in the sun? A BARBARIAN of course! How will Merek and Brin wriggle out of this terrifying tangle?

From the creators of Dinosaur Rescue comes an outrageous and revoltingly funny medieval adventure series that'll set you on fire!

If you are not taken by the fantastic pictures you will definitely enjoy being taken away to another time where Dragons flying around is a common sight and knights protecting the kingdom is the norm, the story is very well written and witty in places. I even found myself chuckling along in a couple of places. I really enjoyed the snippets of information that was given at the end of most chapters especially the one titled Top Five Heroines of the Middle Ages. The part about Penelope of Scoun just about had me in tears as he told nobles and scholars feared her for her perfect punctuation and how it takes a lot of concentration to spot every 'spellig' 'mistak' and how she ended up going mad and spent her last days putting random apos'trophe's into every s'ingle s'entence. I am not sure how accurate it was but I enjoyed reading these never the less.

The book is very easy to read and the chapters are of a good length. Most pages contained a picture taking up half the page if not the whole page. The subject matter of Barbarians had me wiggling in my seat especially when there smell was discussed. I am sure my daughter is going to love it when she gets to read it. The story is very simple to understand and as the book contains the complete story it does not matter if you have read the previous books or not.

The book holds your attention and I found I could not put it down until finished, which took a little over an hour to read in its entirety. It also leaves you wanting more and I find I am really interested in what happens next. I absolutely adore the pictures and find they hold so much expressions and tell there own stories. I am not usually one who likes black and white pictures as I find the details are usually lost but in this case it works and I loved them.

I appreciated that there is a detailed map at the front of the book and also pictures of the lead actors so you knew pretty much who they were before you started. I have read two previous Dragon Knight books beforehand and I think I enjoyed this one a little bit more then the previous ones. I have always loved Dragons and I can not get enough of how cute the Dragon pictures are in this book. A great read that I am sure kids of every ages will enjoy. Mr Six and Miss Four were ecstatic to see me arrive with a new book for us to read together. I had not seen them for a few weeks, and they were overjoyed to find that the book I had to share featured all sorts of delightfully disgusting ogres and smelly Barbarians. Miss Four is beginning to share her older brother's taste for creepy-crawlies and other unmentionables and when we read stories like this there is a great deal of merriment involved.

Mr Six and I took turns reading. He is becoming quite fluent and needed only the occasional prompt when he met a word he did not know. He and I enjoyed the occasional informative maps and sets of five illustrated facts, although Miss Four found these less interesting and preferred to just get on with the story! There were plenty of line drawings to keep up her interest, and they lend themselves quite well to being coloured in at some future stage.

The frequent references to flatulence, chamber pots full of week-old offerings, cleaning the inside of a soiled suit of armour, and other minutiae unsuitable for genteel conversation, may make some adult eyebrows raise, but for younger children these are the basic elements of good humour. All children go through a stage of being fascinated by their own bodily functions and any mention of them is bound to provoke uncontrolled hilarity! Coupled with these references, however, is the inclusion of other, more informative snippets of information which offer an incidental learning opportunity.

I found it interesting myself that both Merek and Breena had two personas. Merek was half boy and half dragon - a very useful attribute when you wanted to chase someone - and Breena preferred to dress as a boy called Brin so she could go off and have adventures. But Mr Six and Miss Four were totally accepting of this duality and were quite happy that people can make random changes in who they are!

We read the book in one sitting and both children gave it the thumbs up. Mr Six said his favourite bit was when Merek changed into a dragon and chased the Barbarians by breathing fire all over them. Miss Four liked the idea that countries could not be sent to the naughty corner to punish them for going to war. And they loved the graphic of the ogre farting because they both thought it looked like a rose even if the story said it did not smell like one!

I can see both of them getting a lot of pleasure from this book. Mr Six will read it again on his own and will no doubt have more comments to offer. While Miss Four cannot yet read, the pictures are plentiful and she can follow the story just by looking at them. A thumbs up from all.