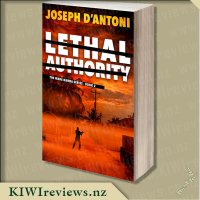 New intelligence skills combined with old investigative instincts honed from his unsettled life in New Orleans and the swamp as Wade confronts his deadly adversaries as the mystery unfolds.

After a rather disappointing start to the series, I wasn't holding out a lot of hope on this one, so it was a wonderful surprise to find a much cleaner, more suspense-filled, cutting story. Gone was the mountain of irrelevant back-story on characters that were destined to make little to no impact on the plot, gone was the aimless waffling and repetitive plot exposition, and most importantly, gone were the micro-cliffhangers at the end of every chapter.

So... Wade's grown up a bit, gotten out of the Navy and he's now a trainee in a new branch of the secret service. Training can be hard, especially when no-one likes you because they're part of The Green Machine Family and you're just a bug-eyed Spook. This, of course, puts Wade in the position of always being on the alert, and enables him to out-think his opponents. While the end result is undoubtedly a success, it's not quite the victory Wade was aiming for... because in the spy game, the game is never over.

With this second instalment, D'Antoni has really pushed the quality bar up. It is still suffering from a few minor issues that are common to self-published titles, but they were less drastic - and far less noticeable - in this title than in Book 1. While some may still find D'Antoni's style not to their tastes, I think this book goes a long way to redeeming the series for me. I am curious how Book 3 will fare.

To solve the crisis, Kaede and Taisin are picked to go on a dangerous and unheard-of journey to the city of the Fairy Queen. Taisin is a sage, thrumming with magic, and Kaede is of the earth, without a speck of the ... more...