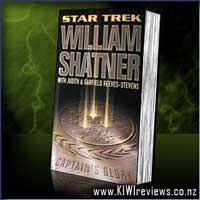 Disclosure StatementFULL DISCLOSURE: A number of units of this product have, at some time, been supplied to KIWIreviews by HarperCollins for the purposes of unbiased, independent reviews. No fee was accepted by KIWIreviews or the reviewers themselves - these are genuine, unpaid consumer reviews.
Available:
From any Good Bookseller

During James T. Kirk's heroic five-year mission as captain of the Starship Enterprise, a mysterious alien threat called "The Totality" commenced its stealthy invasion of our galaxy, intending to conquer the Milky Way Galaxy as it had conquered the galaxy of Andromeda. Now the time for secrecy has passed, and a war unlike any other has begun--one that threatens to destroy the Federation, first by bringing warp travel to an end, and then by absorbing all living matter into a realm that exists beyond human knowledge.

Twice before, Captain Kirk has encountered the Totality. Both times it took the beguiling form of Norinda, an irresistible alien who becomes the woman each person she meets most desperately desires. In his first encounter, Kirk almost lost the Enterprise. In his second encounter, he almost lost his child, and watched in horror as the Totality absorbed Spock in its monstrous dimensional tendrils. But now, Kirk faces an even more devastating personal challenge because battle lines have been drawn, and he and his friend, Captain Jean-Luc Picard are on opposite sides.

Set more than a year after the events of Star Trek Nemesis, on the leading edge of Star Trek's future history, CAPTAIN'S GLORY depicts a Federation attacked from within, on the brink of collapse, with Earth's own solar system an armed and isolated camp. Reunited with Dr. Leonard "Bones" McCoy and Chief Engineer Scott, Kirk must join forces with Admiral Kathryn Janeway and the Starship Voyager's Holographic Doctor in order to save Spock and expose the true nature of the Totality.

With Captain William Riker and Commander Deanna Troi of the Starship Titan caught in the conflict between Kirk and Picard, and with Kirk's own child poised on the brink of a startling destiny millions of years in the making, Kirk must prepare for his third and final encounter with the Totality. But how can Kirk fight an enemy whose greatest weapon is love? And how can he triumph, when the price of victory is the life of his only child?

Managing For Dummies, 3rd edition is perfect for all levels of managers.

This clearly written, easy-to-understand guide gives you practical advice on the most important aspects of managing, such as delegating as opposed to ordering, improving employee performance, getting your message across, understanding ethics and office policies, team building and collaboration, and much more.

New material includes new chapters on employee engagement and corporate social responsibility and greater emphasis on managing employees by leveraging the power of the internet.