Home > Categories > Books > Kids - Junior > This is Where I Stand review

« There's a Bear in the Window review

ProdID: 8813 - This is Where I Stand
Written by Philippa Werry 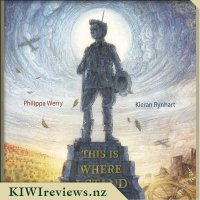 Disclosure StatementFULL DISCLOSURE: A number of units of this product have, at some time, been supplied to KIWIreviews by Scholastic (NZ) or their agents for the purposes of unbiased, independent reviews. No fee was accepted by KIWIreviews or the reviewers themselves - these are genuine, unpaid consumer reviews.
Available:
March 2021

This is Where I Stand product reviews

I am in the wind and the rain and the sun.

I am in the birdsong and the green leaves and the moonlight.

I am in the hearts of those who stop and linger.

THIS IS WHERE I STAND.

A beautiful story centred around the statue of a WW1 soldier - which could be any soldier. The statue gives readers an insight into the soldier's memories of the war as well as what he has seen from his pedestal as the years have passed.

The lyrical text is accompanied by Kieran Rynhart's hauntingly beautiful illustrations. The book will resonate with children and adults alike, and generate discussion between the generations, not only about ANZAC day but about the effects of war in general.

Growing up I remember my Grandad retelling some of his stories from when he was in World War II, I remember listening in awe as to me as a young child it seemed unfathomable that this was reality, and not just something from a movie. I have always wanted my children to be aware of the sacrifices that the men and women made while fighting for our country. Each ANZAC day we make sure to pay our respects, even during the 2020 lockdown we stood at our driveway, while a neighbour nearby played the bugle. When I saw this book was available to request, I knew I would love to add this to our collection, and knew the children would be interested.

When I opened the review package, the book caught my eldest son's eyes and he asked if we could read it, even before checking what else was included in the package. The cover illustration caught my eyes first, the strong soldier on a monument, with a field of poppies on the left, and on his other side it looks like a place of battle, featuring a couple of airplanes in the sky.
As I started reading the words, my son found that they were easy enough for him to read aloud with me, and as we made our way further through the book, we couldn't help but pause and admire the detailed illustrations and discuss what we had just read.

The storyline focuses around what the soldier saw and experienced while he was alive during the war, such as the places he went and the sights that come from a warzone. The story also focuses on what the soldier has seen while standing in his place, from the people that pay no attention, to those that take the time to sit down and spend time reading the names, but also the rallies that took place in front of him. The writing is cohesive and at a level that is suitable for all ages, there is an abundance of soft descriptive language on each page.

I enjoyed reading this with my son as it was an easy gateway into conversation about war and fighting for one's country, and the sacrifices people made so that we could live safely in this country. The author has created a heartfelt story which I personally believe will be read by us each year for the forseeable future. 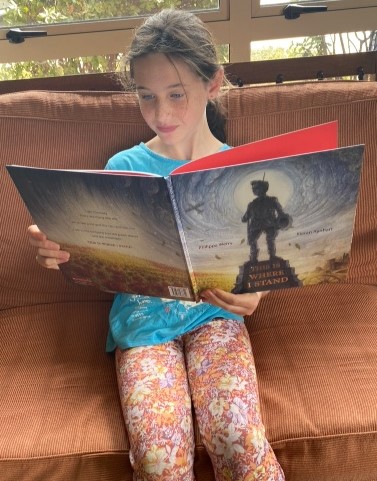 This is one of those classic books which, although ostensibly aimed at children at primary school, can be equally enjoyed by people of all ages because of the timeless appeal of its message. It highlights both the glory and the futility of war, the triumph of soldiers who have won their battle and the tragedy of those who have been killed in action. The statue at the centre of the narrative represents the universal soldier who has served his country in times of crisis.

Our own family has been represented in all the forces at various times; Mr Eleven wears his grandfather's medals with pride on ANZAC day, and photographs and certificates are documents to be treasured. Both the children (Mr Eleven and his sister Miss Nine) are familiar with the various actions, whether active warfare or peace-keeping assignments, that their relations have been involved with, so they could easily relate to the soldier on his pedestal. They did not fail to point out just how young he appeared to be, and the way his steady gaze was directed towards some remembered battle.

I love the way the text is written in heightened prose, almost as a poem. The words beg to be read aloud, slowly and with frequent pauses to allow the implications of the soldier's world to sink in. Everything that happens around him is something he might once have seen, now lost to him forever. His fate is to remain there in all weather, steadfast against the elements. And yet, because he is in a public space, he will never be forgotten.

Life goes on around him. Children play at his feet; the ANZAC service takes place before him every year, bringing back memories of the time he left New Zealand along with his friends to fight for his country. He thinks back to the exotic lands he visited and the wonderful things he saw. And then he remembers the fighting, the injuries, and the inevitable deaths that should never have taken place. Those who should have lived out their lives and grown old are remembered as being eternally young, as he is too.

The illustrations are just beautiful. Their muted colours reflect the time when the young soldier would have been alive: the use of monochrome and shades of sepia offers an impression of the soldier's world at a time when bright artificial colours were uncommon. His standing place is one of shadows and blurred outlines, suggesting the peace he has found on his pedestal in the midst of a modern world.

Both the children - and their parents! - have read the book several times over, and each time they have noticed something new. It is a wonderful way to commemorate the men and women who travelled to unknown places in order to defend those left at home. And yet it does not glorify war as such. The glory rests with those who fought - and often died - for their country. And with those families who gave up their children to the war effort. The statue is for all those people so they can never forget.

Take the stress out of weeknight dinners by letting a well-stocked pantry, fridge and freezer do the work for you. Justine Schofield shows you how, with more than 100 simple meals based on everyday staples.