ProdID: 6324 - A Million Ways to Die in the West
Directed by Seth MacFarlane 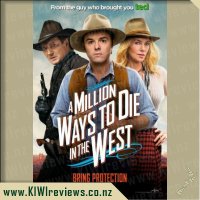 A Million Ways to Die in the West product reviews

Mild-mannered sheep farmer Albert Stark (Seth MacFarlane) feels certain that the Western frontier is trying to kill him, then he loses his girlfriend, Louise (Amanda Seyfried), to the town's most successful businessman. However, a beautiful, pistol-packing woman named Anna (Charlize Theron) rides into town and helps Albert find his inner courage. Then Stark must put his newfound bravery to the test when Anna's outlaw husband arrives with plans to plant him in an unmarked grave.

With all the names in this movie I expected it to be some amazing comedic split my sides laugh out loud laugh a minute big feast. However I think I might of smirked a couple of times and at no time did I make a sound.

I get Seth MacFarlane likes to swear. The occasional one drops out during South Park and well Ted was just a swear a minute feast but this was over the top and really was not needed. I am not a prude by any means but I just got over the fact he swore for the hell of swearing. The movie could of been so much more and really had the potential to be something but it was just flat and really uneventful.

I hate toilet humour I don't see the point in it and when Neil Patrick Harris got diarohea the scenes that followed went way beyond the good taste level and was repulsive. I really expected more from him as he has come a long way and now is not a bad actor. The story itself is not bad its just the execution and the way it is delivered. If they had tamed it in a bit and had the people talk normally instead of 'f' this and 'f' that it could really of been a sweet movie. Such a shame. I love 'Family Guy', I like 'American Dad', I enjoyed 'TED', I'm not a fan of the 'Cleveland Show' but I can watch it, I hated this film. There seems to be a pattern here. Seth MacFarlane is a creative genius. His comedy style is perfect for the cartoon world where extraordinary things can occur, where the characters can do things that are not possible for a real human to do. That is what has always worked; doing something to the absolute extreme. This film is however limited to human capabilities. It is limited by the main actor, Seth himself, who hadn't played a major role until this film.

I spent half of the movie imagining how much funnier it could have been if it was actually animated as a cartoon. The other half was spent watching the clock wondering how much longer the film was going to last. The characters are extremely one-dimensional, such much so that one sentence could literally sum up their entire character throughout the film.

As a fan of 'How I Met Your Mother' I was disappointed in Neil Patrick Harris' performance. Despite it being a performance, it would have been nice for the characters to at least have looked convincing. Not just appearing like a child dressed up on Halloween.

Charlize Theron and Liam Neeson, were the only two characters that looked the part, but even Charlize' character was off-putting at times. The overall comedy was ill-fitting for the plot of the film. With the majority of the jokes based around farts, faeces, and drugs-taking, the combination with gruesome murders and deaths seemed wrong, and I really have no idea what age group that this would be targeted at (even for me, the jail scene was extreme, and I watch gore like 'Saw').

The only part of the film that I did enjoy, was near the beginning where you visually got to see some of the "millions ways to die in the west" but verbally, it was excruciating to listen to, as was Sarah Silverman.

This film let me down incredibly. I would rate it lower than the latest films put out by the 'Scary Movie' genre of parodies ('Date Movie', 'Vampires Suck', 'Disaster Movie'), and at 116 minutes, it was two hours wasted.

The city needs heroes. Darkness has settled over New York City as Shredder and his evil Foot Clan have an iron grip on everything from the police to the politicians. The future is grim until four unlikely outcast brothers rise from the sewers and discover their destiny as Teenage Mutant Ninja Turtles. The Turtles must work with fearless reporter April and her wise-cracking cameraman Vern Fenwick to save the city and unravel Shredder's diabolical plan.