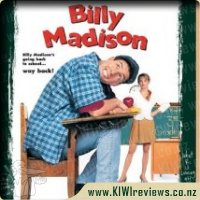 In order to inherit his fed up father's hotel empire, an immature and lazy man must repeat grades 1-12 all over again.

One the most stupid films that I have ever seen, and of all the films I have seen Adam Sandler in, this has to be his worst and I can barely stand it. I do own it, but only because it was part of a five disc movie pack, and I only watch it when my brain doesn't want to think at all.

Adam Sandler plays Billy Madison, a sex obsessed lazy man-child who's father is about to retire and hand over the reigns, but since Billy is so inept he's going to pass it onto another person (who naturally has evil plans for the business). Billy begs him for a chance and promises to go back to school, starting right at the beginning, in an effort to prove himself and keep his fathers business.

This is a pretty mind numbing movie, and rather a waste of time. I wouldn't take the time nor the effort to put this disc into the DVD player and press play, not worth it. It's bearable the first time, but after that...