« The Young Ones - Series Two review 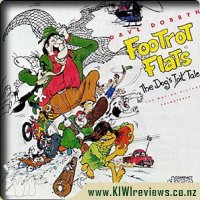 Since Footrot Flats The Dog's Tale arrival on New Zealand cinema screens in 1987, it has become one of New Zealand's most beloved movies.

Crafted from the well loved characters of cartoonist Murray Ball's imagination, and starring the vocal talents of John Clark, Peter Rowley, Rawiri Paratene and Fiona Samuel, Footrot Flats The Dog's Tale tells the story of farmer Wal Footrot, his dog - Dog and the community that surrounds them.

Footrot Flats is well known in New Zealand, a New Zealand icon if you will. I grew up flicking through my dads copies of the comic strip books and watched the movie a million times as a kid. I absolutely love it. And that has not changed over the years. As an adult I still love it. And as an added bonus, so do my kids.

I am first to admit it is kind of weird, somewhat quirky, and with no real point to the movie to be honest. But hey it is a dogs tale not a humans tale, and as dogs are the equivalent of ADHD children, the movie is perfectly told from a dogs point of view. Every time I watch it I can not help but laugh. I love that watching it reminds me of happier times from my childhood, and the mere mention of this movie always makes me smile.

The movie hit our screens in 1987, crafted by Murray Ball, it is nearly 30 years old, so with that in mind I think it is really well made. Being that it came after the comic strip I admit that I think it is really awesome that the characters featured look like comic strip drawings and are exactly as you see them in the books. A fantastic tale of courage, friendship, featuring typical New Zealand: sheep, black singlets, shorts, gumboots, rugby, pies and tomato sauce. :) a real kiwi classic. Love it.

I seriously don't get this movie at all but then I didn't grow up in New Zealand so didn't have the advantage of knowing the cartoons and characters. I bought the DVD for my daughter when she was little and she has never watched it right to the end. I did enjoy the music and my boys love "Slice of Heaven" by Dave Dobbyn and the music video that goes with that song but even they have never seen it right to the end of the movie.

The artwork and graphics were great, the music was great and what I have seen of the storyline is good, there were some laughs and sometimes I have to shake my head and wonder.

I will try and watch this movie properly one day when I'm not so busy but for me most the story was lost due to not being a kiwi.

As with most Kiwis I was very familiar with the Footrot Flats cartoons growing up. I also recall the excitement as a teenager going to the movies see it transformed into a film. There was lots of buzz about it because New Zealand didn't make many movies then and making a movie length cartoon was something that hadn't been done here before.

I would not say that the movie was a let down but it had been hyped up so much that it couldn't reach these expectations. The characters looked very true to the comic strip. John Clarke, famous for his Fred Dagg character, was the obvious choice for the voice of Wal and does it so well.

The thing I liked best about the movie was the music by Dave Dobbyn. This was when he was in his prime and wrote and preformed some of his best work for the movie. Maybe I am just showing my age but as a teenager the music was just as important as anything else in the movie.

This movie is a Kiwi classic which pokes fun at our farmers and asks you to leave your brain at the door.

A typical day on the slopes turns into a chilling nightmare for three snowboarders when they get stranded on the chairlift before their last run. As the ski patrol switches off the night lights, they realize with growing panic that they've been left behind dangling high off the round with no way down.

With the resort closed until the ... more...