The Hobbit: 3: The Battle of the Five Armies review 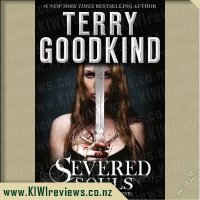 From Terry Goodkind, author of the Sword of Truth series, comes a sweeping new novel of Richard Rahl, Kahlan Amnell, and their world. From the far reaches of the D'Haran Empire, Bishop Hannis Arc and the ancient Emperor Sulachan lead a vast horde of Shun-Tuk and other depraved "half-people" into the Empire's heart, raising an army of the dead in order to threaten the world of the living. Meanwhile, far from home, Richard Rahl and Kahlan Amnell must defend themselves and their followers from a series of terrifying threats, despite a magical sickness that depletes their strength and which, if not cured, will take their lives...sooner rather than later.

This is the third Richard and Kahlan novel and 14th overall in the Sword of Truth series by Terry Goodkind. If you are a fan of the fantasy genre then you are bound to have come across these books at one time or another.

This book picks up exactly where we left off in the previous book, The Third Kingdom. Richard has succeeded in freeing his people from the clutches of Hannis Arc, Emperor Sulachan and the half people and is now on a mission to get back to the People's Palace so that the call of death can be removed from both him and Kahlan. During the course of their journey they face what seem to be insurmountable obstacles - hoards of half people, occult magic, flying creatures and even a witch woman. In the meantime Hannis Arc, Emperor Sulachan and their army of half people are free to destroy and conquer the D'Haran Empire.

Long is the word I would use to describe this book. For the third book in a series there is far too much back story especially since if you're reading this book then you're likely to have read the Sword of Truth series already. I would even go as far to say that there is too much backstory for those who are new to the series. It makes for a very slow paced book which left me feeling bored and frustrated - the brief periods of action and excitement had the life sucked out of them as I slogged through page after page of completely unnecessary information.

The story doesn't start to pick up until you get close to the end of the book but when it does, boy it is good. There were things that I never saw coming and some that I did but were no less heartbreaking. However, I was very disappointed with the ending - just as things were getting good it ended, abruptly and with lots of loose ends.

The whole series is a bit of a mixed bag but I've been a fan of Terry Goodkind since I was a teenager and I just can't help coming back for more.

It's a darned long way to the summit of the Rimutakas, and a steep climb at that. But Engine H 199 used to do its bit to get people and freight through the Rimutaka Ranges. At the end of the story, which is told in Cowley's faultless rhyme and rhythm, is a double-page fact spread about the locomotives and brake vans that were needed to achieve this feat.