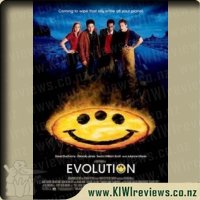 When a meteorite falls to Earth two college professors, Dr. Ira Kane and Prof. Harry Phineas Block, are assigned the job of checking the site out. At the site, they discover organisms not of this planet. Soon the site is taken over by the government, forcing Ira and Harry to the side. As the new life-forms begin to evolve and start to get more and more dangerous, it's up to the two professors to save the planet.

It begins with the introduction Wayne Green, a wannabe fireman practising for his fireman final when a meteor carrying alien organisms hits the heart of the Arizona desert. After a community college science professor, Ira Kane and his eccentric geologist buddy, Harry Block, discover the meteor, they find that the `bleeding' rock starts to create these weird alien creatures and soon they begin to multiply. Kane's nemeses and the military get involved, things get out-of-control and they must all team up to save the world.

Evolution is a crowd-pleaser with nice special effects and make-up, there's enough here to compare it to Ghostbusters, going so far as to have a sequence in the film where Duchovny, Jones and Scott chase down a flying creature in a mall. The three, equipped with shotguns, dispose of it in true Ghostbusters style. There's plenty to laugh at, and the actors do a good job, Moore is kind of annoying and doesn't stand out but Duchovny does a great job and is hilarious throughout it, was great to see him in a comedy role. The movie is a lot of fun and you're sure to have a good couple of hours.

This wouldn't be the first movie I grab off the shelf when wanting something to watch but I know if I do I will enjoy myself.

Score: 10.0
Product reviews for listing 6065: Stand By Me
Directed by Rob Reiner

In a small woodsy Oregon town, a group of friends- sensitive Gordie, tough-guy Chris, and flamboyant Teddy are in search of a missing teenager's body. Wanting to be heroes in each others' and their hometown's eyes, they set out on an unforgettable two-day trek that turns into an odyssey of self-discovery. When they encounter the town's knife-wielding hoods who are also after the body, the boys discover a strength they never knew they had.