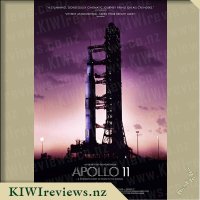 Apollo 11's journey to land on the moon is a mission that led to countless documentaries, dramatisations, and fictitious spin-offs since that illustrious period in July of 1969. It has gotten to the point that I personally wondered if there was really any point in making any more; is there anything further that these films and documentaries could add, that would bring back that sense of wonder. Never one to let any preconceived notions stop me from checking out the film, I went to Madman's media screening and was shocked to be greeted by a completely full theatre. The front row was full, there were no gaps in the middle. The story of Apollo 11 was clearly a topic that still had a lot of weight to it.

Where Apollo 11 differs from other documentaries is its linear style. Thanks to the discovery of a wealth of never-before-seen, high-quality footage from the National Archives & Records Administration (NARA), director Todd Douglas Miller was able to digitize this film and compose a retelling of events without the need for anything after the fact. All of the footage comes from the time it occurred; no later interviews of people looking back, no dramatizations or recreations. Everything occurs as it happens, and it creates an exceptionally unbiased and immersive experience.

The scope and resolution of the footage are absolutely fascinating. It fills in so many of the missing pieces that we didn't always get to see; the crawler moving Saturn V to the launchpad, withdrawals of the gangways, contractors fixing hydrogen leaks, the strength of the crowds that came to witness the spectacle. All brilliantly clear and focused quality. Apollo 11 does its best to explain everything as much as possible and is very transparent in its visuals, frequently posting relevant stats such as speed, elevation, time travelled, even heart rates. It creates an incredibly cohesive story despite not having any form of overlying narration. All information comes from audio recorded at the time.

While Apollo 11 provides some gorgeous new, wide-shot footage, the majority of the high-quality content is from on land (obviously Neil Armstrong, Buzz Aldrin, and Michael Collins were rather limited in the equipment they had access to in space), and what this really does is shine more light on the other people behind the scenes. It sheds light on the CAPCOM (the capsule communicator, who is the only person that communicated directly with the flight crew on Apollo 11, as well as the Green, White, and Black teams that looked after the launch, lunar landing and lunar launch respectively.

There is a wealth of new information and details to be found, and being able to see it in such high definition is a delight. Apollo 11 follows the mission prior to take-off, all the way to their return to Earth, and still manages to create suspense and tension despite everyone knowing the end result beforehand. The pacing and footage choice was very well selected. The only aspect of the documentary that isn't archival content is the score by Matt Morton. Even then, Morton makes use of pre-1969 equipment to generate his pulsating electronic soundtrack, and masterfully builds tension when the stakes are high, and an airy ambience during the downtime.

Apollo 11 has a remarkable opulence to it. Immersive in how everything is brought together making it feel like you are witnessing it as it happens. It feels like you are experiencing this momentous occasion first-hand, and Apollo 11 should definitely be experienced on the biggest screen you can find.