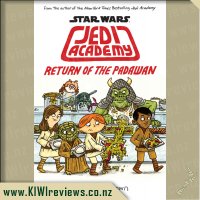 After surviving his first year at Jedi Academy, Roan Novachez thought his second year would be a breeze. He couldn't have been more wrong. Roan feels like he is drifting apart from his friends and it's only made worse when he discovers he is not the amazing pilot he though he would be. When the school bullies take him under their wing, he decides they are not so bad after all or are they.

This year, Roan will have to face alien poetry tests, menacing robots, food fights, flight simulation class, online bullies, more lightsaber duels and worst of all, a girl who is mad at him.

Initially I requested for my daughter and husband as they are huge Star Wars fans. Although my daughter has only watched the Lego Star Wars and has seen some comic books she still knows more about the characters than I do. So I was a little surprised after five pages and she walked away and went and played and did not want to hear the rest. I carried on reading and found it is way easier to read in your mind than out loud especially with some of the weird names.

I am so surprised with how much I really enjoyed it. It is told in a couple of mediums, mostly via comics but there is also his journal entries and notes he is passed on so the writing is continuously changing. The story is basically Roan's second year at Jedi Academy and all the trials and tribulations that he goes through.

As a typical kid he fights with his friends, has lots of misunderstandings of the subject and realises in the end that he was wrong about most things. He thinks hes a god at school and usually stuffs up but survives never the less. I am actually really interesting in reading the first book now as I enjoyed so much and definitly hanging out for the next one.

After finishing the book last night I put it on my book stand and went upstairs to prepare for bed, by the time I got downstairs my husband was happily enjoying reading it. He told me he was hanging out for it and stayed up most of the night reading it.

I think this will be great for my daughter to read by herself next year sometime when she has more reading confidence. There are some hard words, but they are 'alien' so is to be expected. The pictures thru out are basic but they do there job. The only real difficulty I had reading it was with the school report from the PE teacher and on one occasion with the Home Economics notes.

It was neat to see that Roan draws/writes stories for the school paper. At the end of the book there is a big story about an Ewok Jedi wannabe - I love Ewoks - and even has a small thesaurus. A really enjoyable book for Star Wars fans big and small.

When Digory and Polly are tricked by Digory's peculiar Uncle Andrew into becoming part of an experiment, they set off on the adventure of a lifetime. What happens to the children when they touch Uncle Andrew's magic rings is far beyond anything even the old magician could have imagined.

Hurtled into the Wood between the Worlds, the children soon find that they can enter many worlds through the mysterious pools there. In one world they ... more...