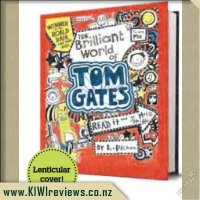 When my teacher Mr Fullerman doesn't have his BEADY EYES on me, I like to draw pictures and write stories about stuff, like when we had the worst holiday ever and when my parents came to school for parents' evening. All I want to do is get tickets to see the best band ever - DUDE3 - when they come to town.

We have not read any titles by Tom Gates before but definitely will be in the future! They are fun, humorous, captivating and very well done!
Mr 7 isn't a huge reader but did not put this done till the boom was finished, I loved that it was a light read he could read on his own as well as something we could read together and both enjoy. Eli thought it was a cool book and enjoyed the ways Tom Gates came up with to get out of his homework! I found he could relate to the book so enjoyed it more than he usually would.
I like the comic style illustrations and that the words are well set out for young readers. It encouraged Eli to not only read more but to interact with his siblings more in a positive way sharing the bits he found funny.
I have seen the book compared with "The Wimpy Kids"series and would have to agree although Eli thinks that the Tom Gates books are "way funner"
I would recommend the books to any parents with boys, especially ones with reluctant readers and that are usually easily distracted. Fun for both children and their parents.

I read my first Tom Gates book last school holidays, and so as soon as I saw this I wanted to give it a go. I was not disappointed. This book is more of an introduction to Tom Gates and his world. The other book I read was number 2 in the series, but they are written as episodic. So you don't really need to know much going in. Pichon covers off everything you need to know.

Basically Tom Gates is this kid who loves to doodle and draw. He is in a band with his best friend, hates his sister and loves these caramel wafer biscuit things. In this story, he is dealing with school stuff. He has kind of a bully, though I found a lot of his behaviour towards the guy to be more bullying as well. I'm not sure how I felt about that. A few times I cringed at what he seemed to think was funny, but I can remember being a kid and doing things I hadn't really thought through.

Tom's descriptions of his family are funny, especially his grandparents and their cooking. His clever tricks and ways around homework that wasn't done were pretty brilliant at times. The main storyline was cool, and I really liked the way it went. There were a few questions I had, which got cleared up. Obviously not every conversation he has with his parents is recorded in his book. But when the main event took place, I loved the tie in to an earlier funny moment at school.

I could see this series making a cool movie as well. Tom Gates could be the new Whimpy Kid, though he is more of your average kid. Middle of the road and maybe even a little bit cool. $25 seems a lot for a kid's novel, but this is hard cover. Lengthwise it's quite a bit longer than other novels for this age group, even with all the illustrations. Plus this copy had the moving picture cover which is pretty cool!

Score: 3.3
Product reviews for listing 5898: The Unbearable Dreamworld of Champa the Driver -  Written by Chan Koonchung

Life is simple for Champa. He has a good job as a chauffeur in his hometown of Lhasa, and if his Chinese boss Plum is a little domineering, well, he can understand that - she's a serious art-collector after all. And he does get to drive her huge Toyota.

When he starts to sleep with his boss, life becomes a whole lot more complicated. Suddenly Champa's sex life is beyond his wildest ... more...