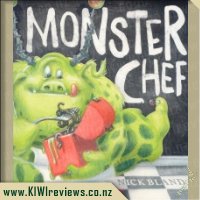 My children love books, neither of them are able to read on their own yet but they just love flicking through a book and looking at all the pictures. My daughter (3 yrs) has just started to make up the story based on the pictures she sees which is very cute and also shows just how well the pictures relate to the story.

On first inspection of this book I noticed that the front cover wasn't as bright and eye catching as many other kids books are. It was still colourful with the big green monster on the front but just not as bright. It was however nice that there were different textures on it which is great for little children to run their fingers over. My daughter and son loved it and were pretty excited to see a monster on the front.

The story line was a bit sad at first with the main character, a monster, down about his work and not really enjoying what he does, after all, he's a monster who can't scare! Although he does love to come home and cook. Through a fortunate series of events Marcel eventually learns that what he loves doing, cooking, is the perfect job for him and through his food, he can even scare.

My daughter really liked this story and through the images on each page she could vaguely figure out the story line which is very good and shows that the pictures really work in telling the story too. We took this book into daycare and the teacher read it to the class with my daughters help. All the boys loved the interesting ingredients used and paid attention for the whole story. Apparently their eyes start to glaze over when the girls bring in some books to read but this one was right up their alley.

The front cover of Monster Chef was what drew us to this book. Aside from it being by the amazing Nick Bland (we own a few of Bland's books), the cover art is fantastic. Against a matte charcoal grey background, Marcel the monster is gorgeously green and shiny. The texture of his fur is etched into the shiny portion of his body, which is lovely to explore with your fingers.

Inside is a tale that my children both enjoyed. My toddler flicked the pages over with great gusto, ohhing and ahhing over each new picture. She pointed to things she recognised and said their names. She also roared appropriately much to the amusement of her sister. My 7 year old enjoyed the story, and liked the monster cooking. I thought she might be grossed out by it, as she is already a fussy eater. But she thought it was funny, and did a lot of giggling and pointing at the pots and baked "goodies".

For me though, the story was something else entirely. It doesn't always occur to children that an adult can be in a job that doesn't suit them or they don't like. No child goes to school and says "I hope I have an office job" or "I'm hoping to work in fast food all my life" while they are at school. Yet, we grow up and we end up doing roles that don't always light us up. To me, that was Marcel's tale.

Here he is, a monster, who can't scare. Yet every day, off he goes to what must be a soul destroying job. And then when he comes home, he has his cooking hobby and that is what makes him light up. That's the thing that makes his life worth living. And then this moment happens and it changes everything for him. He gets an opportunity to change things and he takes it. And that to me is the magic of this book. What a joyful thing to read as a parent and adult, feeling trapped or dreaming of something else or MORE. Shouldn't we all be a little bit more Marcel and a little less trapped in the square. I think so.

The ancient menace has finally escaped from Lalonde, shattering the Confederation's peaceful existence. Those who succumbed to it have acquired godlike powers, but for now follow a far from divine gospel as they advance inexorably from world to world.

Governments teeter on the brink of anarchy, the Confederation Navy is dangerously over-stretched, and a dark messiah prepares to involve his own version of the final Night. ... more...