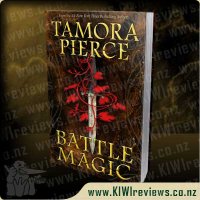 Disclosure StatementFULL DISCLOSURE: A number of units of this product have, at some time, been supplied to KIWIreviews by Scholastic (NZ) or their agents for the purposes of unbiased, independent reviews. No fee was accepted by KIWIreviews or the reviewers themselves - these are genuine, unpaid consumer reviews.
Available:
November 2013

On their way to the first Circle temple in Gyongxi, mages Briar, Rosethorn, and Evvy pay a visit to the emperor's summer palace. Although treated like royalty when they first arrive, the mages soon discover that the emperor plans to invade Gyongxi, posing a fatal threat to the home temple of the Living Circle religion.

Accompanied by one of the emperor's prize captives, the three mages rush to Gyongxi to warn its citizens of the impending attack. With the imperials hot on their trail, Briar, Rosethorn, and Evvy must quickly help the country prepare for battle. But even with the help of new allies, will their combined forces be enough to fight the imperial army and win the war?

This book takes ages to really get into the story and it is really complicated and involved so don't start reading if you are likely to be interrupted. I found that I was having to go back and read parts of the book again.

The characters are well written, you can see the worry and disgust at some parts. They are able to hide feelings when needed. I haven't yet finished the book as no matter how much I try I can't get into the story well enough to lose track of time and then it is confusing when I'm trying to follow the story, I find to read about a chapter each time is about as much as I could handle. I'm hoping to finish the book as I would love to know what happens and if the new alliances work well together or not.

I would not recommend this book to young readers, it is probably more suited to young adults as some of the topics wouldn't be understood by younger readers. Like most "magic" type stories there is a lot of words that are made up and I find the spelling a bit of a bother but it is not a major deal. Just read when the kids are in bed and not sick or you will spend ages trying to finish it, the book is only 440 pages but it can be a hard read and needs a lot of concentration.

Hidden under a small suburban town, the Inventory is a collection of the most incredible technology the world has NEVER seen: invisible camouflage, HoverBoots, indestructible metals, and the deadly war robot Iron Fist. Dev's uncle, Charles Parker, is the inventory's mild-mannered curator, with security provided by Eema, a beyond-state-of-the-art artificial intelligence system.

But security is catastrophically breached when ... more...