Giraffe and the Pelly and Me review 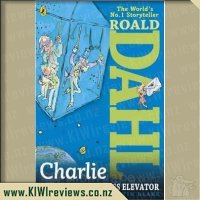 Charlie Bucket has won Willy Wonka's chocolate factory and is on his way to take possession of it - in none other than a great glass elevator! But when the elevator makes a fearful whooshing noise, Charlie and his family find themselves in splendid orbit around the Earth. A daring adventure has begun, with the one and only Mr Willy Wonka leading the way.

After reading the first book with the adventures of Charlie Bucket and Willy Wonka, I had to get the follow on story Charlie and the Great Glass Elevator, to read to my daughter. When she saw that I had bought it, she was so happy. There was clapping and jumping and excited chatter. Bedtime could not come soon enough. We settled down to read what happened next to Charlie in that Elevator after picking his whole family up.

As it happens they go to space and they encounter some aliens. This part of the book I thoroughly remember from my childhood. Though reading it to my small daughter, I did suddenly feel more scared than I was as a kid. Looking at her though, she was fine. But the aliens are a little scary, and as all great stories go the situation feels hopeless a few times.

Half way through the book, another story line begins and the whole thing feels a little disjointed. I felt like he had lost me for a bit, but my daughter loved each part of the book. There was a whole section in here that kinda felt like pointless filler though. At the end it all ties together which was a relief but I didn't find this book as satisfying as the first. Reading the trivia in the back, I found that a third book in the series was started but not completed. In some ways, I'm glad though it would be interesting to know what happened at their next destination.

This book will get re-read at some point for the youngest child's benefit. I actually paid $10 for this, and I thought it was good value. Dahl is a classic for kid's and I'm happy to have this in our collection.