« I'm Wild About You! review 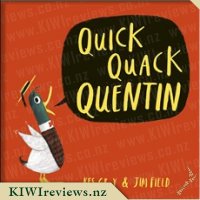 Disclosure StatementFULL DISCLOSURE: A number of units of this product have, at some time, been supplied to KIWIreviews by Hachette or their agents for the purposes of unbiased, independent reviews. No fee was accepted by KIWIreviews or the reviewers themselves - these are genuine, unpaid consumer reviews.
Available:
August 2016

Quentin was a duck with a very quick quck. "Quck!" said Quentin. "What's wrong with me?"

Brilliant for reading out loud and teaching children about vowels and animals. Miss 4 homed in on this book and could not wait for me to read it with her. She was drawn to the bright simplicity of the cover graphic and, since she is beginning to recognise individual letters of the alphabet, immediately spotted the difference between the vowels in the words Quick and Quack. Before we started to read together, we sounded out the two vowels "i" and "a" in those words so she would be ready to listen to the story.

As she had recently visited the doctor herself, she understood what was going on in the first double-page spread. The doctor in the book was wearing a stethoscope too, just as her own doctor did. The patient, poor Quentin, was trying to say "Quack" but it came out all wrong because the vowel was missing. Miss Four tried to say "Quack" without a vowel, just as Quentin did, and was amused at what happened because she had had a sore throat too a few days earlier, so her voice had sounded just as funny. (Incidentally, Miss Four has implicit trust in doctors, so she was completely accepting of the diagnosis for Quentin.)

I did not think a child so young would understand the importance of vowels, but, as we read on through the story together, it was clear that she was interacting with the animal sounds and trying them out twice, once with the "a" vowel in place, and once without. It took us quite a long time to get right through the book as we had to keep stopping so we could laugh.

When we had finally reached the last page and it was time for her to go to sleep, I put the book down - but she was still going through the story again, repeating the parts she enjoyed most and retelling them for me. It was clear that she had gained lots of new ideas from the book and was wanting to practise them on me. She had even worked out that, as her own name contained not one but two "A"s, she could possibly share one if she absolutely had to, but there again, she would rather not.

I was especially impressed that she now knows what a vowel is and why every word needs a vowel sound. As her own name starts with an A, she was already familiar with that letter and the different sounds associated with it, but she now knows the other four vowels as well. This is great for a pre-schooler as she has taken these concepts on board quite painlessly while she has been enjoying the book for its own sake. If only all learning could be like this!

Inside this cookbook you will find more great recipes from the Revive Cafe that you can cook at home. Revive's delicious vegetarian food contains whole grains, plant-based protein, fresh produce and virtually no processed sugars or flours. The majority of the dishes are also dairy and gluten free.