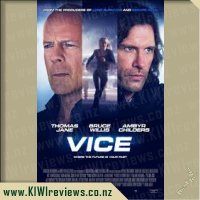 Julian Michaels (Bruce Willis) has designed the ultimate resort: VICE, where anything goes and the customers can play out their wildest fantasies with artificial inhabitants who look, think and feel like humans.

When an artificial (Ambyr Childers) becomes self-aware and escapes, she finds herself caught in the crossfire between Julian's mercenaries and a cop (Thomas Jane) who is hell-bent on shutting down Vice, and stopping the violence once and for all. Bruce Willis seems to have a thing for robotic technology. Having been in 'Surrogates' where people use robots to fulfil their daily tasks without having to leave the house, and now in 'Vice' running a high-class resort where all the residents are complex robots (cyborgs I guess?) where the guests can do whatever they want (kill, rape, etc.). I feel the premise has really been overused with the anti-trust movement regarding artificial intelligence. Even Will Smith has been in similar films (I, Robot). It all just felt repetitive and unoriginal.

While it opened up some more interesting questions around what point would constitute a crime when it involves AI units, it felt forced and the entire film had very little plot. Thomas Jane looks weird with long hair (a bit like TJ Miller) so I couldn't really take him seriously).

But credit where credit is due; the first 25 minutes of the film were amazing. I couldn't wait to see where the film was going to take it, but it really failed from that point on. The actual reason for the resorts existence for example, was only mentioned near the end as an off-handed comment, and went nowhere further.

I think the film was poorly cast with the exception of Evan, played by Bryan Greenberg, who in my eyes was the only character that convinced me of his character's authenticity. Ambyr Childer's "Kelly" was a very flat character, whose primary role was to say "I don't understand" and run away from everything. Even towards the climax of the film, when "upgraded" characters are returning to seek vengeance, there is little action, no explosions. Pure anti-climax.

That first 25 minutes though...they were exquisite.