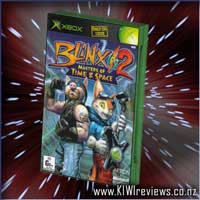 Blinx 2: Masters of Time & Space continues the adventures of Blinx, a heroic cat with the ability to make time slow, fast forward, rewind, or stop. In this sequel, Blinx and his squad of tough, agile cats use their time control powers to battle menacing time monsters, outmaneuver the criminal pig gang, and discover why time is disappearing.

Step into the shoes of the cats' rivals-the sneaky pigs-who are equipped with the ability to morph and control space. These crooks tackle various challenges using their stealth skills, powerful weapons, and mastery of the space continuum.

Features
•  Control time as the hero: Play the role of a heroic cat and control time to face tough battles and puzzling challenges. Pause, slow, fast-forward, rewind - it's just like using a VCR remote control on the real world.
Control space as the enemy: Become a sneaky pig and control the space continuum in stealth missions. Make warp holes to transport past guards, create bottomless pits to trap enemies, and more. Controlling space means having worm holes and black holes available on-command.
•  Work as a team: Get a teammate to play through the story together in two-player Cooperative mode. Overcome tough enemies and unique two-player challenges with strategy and teamwork.
Square off against friends: Compete in the new Battle mode to use time and space powers against friends. Up to four players can simultaneously battle on one Xbox.
•  Show your style: Customize the face, body, and clothing of characters. This is a first among action-platformers. More than 25 characteristics can be adjusted in up to 100 ways, so gamers can make the characters as unique as they are.

Platform games haven't really evolved all that much when you strip them back to the basics. [run/climb/walk/crawl] around a [maze/map/platforms], [shooting/hitting/pressing/pulling] the [baddie/trigger/thing] to get the [shiny/useful/useless] things. More things, the better."

This, it seems, is still the format. However, it's the little things that matter more now. We have the layouts, we have the pretty graphics, we have the serious-number-crunching cpu's... now it seems sheer style is becoming the new battleground. Little touches like the raindrops hitting the 'camera lens' and distorting the gamescreen in realtime, as they slowly slide down the lens, joining, dripping, falling. Seriously high dinky factor for that folks!

You start the game playing as Tama, one of the leaders of 'the other Time-Sweeper teams. Your mission, to secure the first Big Crystal fragment. The Big Crystal is the source of all Time Energy. It's broken, shattered and scattered across time and space. After you beat the big-bad-monster at the end, you move onwards to the next piece, while your team proceed to get mugged by the Tom Tom Gang. That's where you come in again.

You see, in this one, you get to play the WHOLE storyline, from both sides! Your second mission as a player, is to take the part of the marauding Tom Tom's, beat the Cats, and steal the first chunk of the Big Crystal before they can get it back to base.

Talk about addictive! After hammering the hell out of time monsters as one of the good guys, who can manipulate time, you then turn around and open up a can of buttwhack on said good-guys as a humanoid pig who can warp space. Both sides have unique gameplay, but use the controls in a brilliantly consistant manner, making for rapid adaptation between the sides.

With a lot of improvisation possible when it comes to ways of combining tactics and weaponry to solve the puzzles and progress, a quick thinker can have a lot of fun playing strategic games, however even a beginner can have a really satisfying game with plenty of in-game training supplied. This means that it really grabs you right up front, from the moment you put the disc in, right through until the birds waking up reminds you that sleep was on the agenda and you're late for the appointment.

Little tricks to keep in mind. Pause. Always a great option. Slow is handy, but pause is the ace of your Time weapons. Both sides have access to this function. The Sweepers (cats) collect crystals, the pigs get grenades. As a Sweeper, pausing a cannon-blast will allow you to not only escape being stredded, but provides you with a great souce of explosive ammo to vacuum up. Pause, start the vac, run through the blast towards your escape... you'll top up the sweeper unit in moments, and the missiles are great for long-range shots against gun emplacements.

As a Tom Tom, your stealth is your biggest asset, practice the Y button with diligence, young padawan.Your slingshot is also great for stealth, but delivers a weak punch. 4-5 direct hits on a cat just puts them to sleep. And do NOT get me started on those Banas as weapons. Grrrr... but my favourite would have to be the Decoys. Wind-up drones with holographic chameleon abilities. The cats will chase them in preference to you, so they are to be used wisely.

Graphics: stunning. pretty par for the xbox course really. Soundtrack: funky, but quite ignorable. Sound Effects: Subtle, almost to the point of pointlessness, but they pipe up when there's something really important. great idea. Background noise should be just that, and it is, in this game.

Slight niggles... Bananas (grrr) have proper ballistic trajectories. Slingshot darts don't. Rubbish fired from a Time-Sweeper unit will bounce off walls reasonably correctly, but when fired long range, no trajectory required. For Masters of Time, those Sweepers sure can make a small fridge fly like a laser, straight and true.

Overall, I'm still hammering away at it. :) The pigs are slightly more interesting to play, but they accumulate the spoils of battle a lot slower. Cats get bonus gold for items being carried at the end of each mission. Pigs only get that at the end of each level. However, despite the items are worth a little more to the pigs, it still doesn't come out even. A totally enjoyable game for any who liked Grabbed by the Ghoulies or the Crash Bandicoot series.

The stakes have been raised. Imagine living in a place so wretched that it's not plagued by one, two, or even three monsters â" but seven of the most horrifying fiends!

In this game, you'll come face to face with them all as you work together to rid the town of the maniacal or misunderstood creaturesâ¦before it's too late.