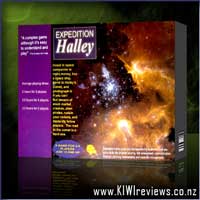 Disclosure StatementFULL DISCLOSURE: A number of units of this product have, at some time, been supplied to KIWIreviews by Expedition Halley or their agents for the purposes of unbiased, independent reviews. No fee was accepted by KIWIreviews or the reviewers themselves - these are genuine, unpaid consumer reviews.
Available:
at selected games retailers

Expedition Halley gives you the opportunity to develop and use many skills, like problem solving, risk assessment, communication, strategic planning, mathematics and business mangement.

Invest in space companies to make money, buy a spaceship, travel to Halley's Comet and photograph it... if you can!

But beware of stock market crashes, alien pirates, rust in your rockets, and dastardly fellow players. The road to the comet is a hard one.

UPDATE 03/09/11: After a request from a reader, we have attempted to make contact with the manufacturer. Unfortunately, we have been unable to and research indicates this product may no longer be available anywhere.

I wasn't sure what to expect from this game... after reading the blurb on the back I figured there was going to be some 'raising money' aspect and then some 'buying stuff' aspect too... I was kinda right I suppose...

The first half of the game involves running around the board in various directions, thus affecting the price of the various stock companies. You can only buy certain stocks depending on the square you land on, and can always sell stocks, and thus you attempt to raise money.

I found this aspect of the game to be quite fun, with the mental stimulation of trying to assess a particular stock's potential earning power based on the number of times its price changes, what its peak price is, how likely the odds of reaching that peak are, etc... it soon became clear that it's unwise to simply look at the top value of a stock, as it rarely reaches that point, but instead you should look at the top 3-5 values, as it will probably reach that region. If only the REAL stock market had that kind of reliability.

The second part of the game is where it kinda fell over for me. After about an hour and a half of trying to kick the 'Monopoly' habit of holding some cash in hand in case of unexpected rental payments... something this game doesn't have... and running around the board... we all got a bit tired of it, so just shuffled the spaceship cards and each team selected one at random, same with the cameras and solar umbrella... then we all progressed on to Phase 2... this is where it turned into a 'Twist-a-Plot' style game, with a booklet of paragraphs, each describing some action or event... and of course a conditional link to one or more other paragraphs... it got a bit tedious after a short while.

Overall, though it's not the greatest game I have played, I am sure that it will be one of those whose appeal lies mostly with the dedicated science fans... and it'll grow on you if you play it a few times I suppose. You can speed the game up a bit by starting off with more than the recommended $200k (we started with an extra half-mil) or by shuffling the ship and/or camera cards and selecting one at random. It's not a bad game, it's just one that would have it's best appeal to a niche market. So if you like a bit of a brain-workout, with a bit of a run-around afterwards, have a look at this one.

This game was kind of interesting to learn, and had aspects I found quite thought-provoking. The stock market part of the gameplay was great for providing strategy and a means of possibly increasing your wealth while having a chance to screw over your opponent at the same time. The table in the centre of the game board was easy to follow and understand. There were squares on the board which allowed for the option of changing the direction you travelled.

Once you get past the first level of play, the rules and game play, for me, became more like a choose your own adventure book. This was an ok idea for the game, but it did tend to slow play down and meant a greater amount of confusion as to who won, and how.

Not my most favourite game ever, but I am sure if I play often enough I'll get used to the aspects that frustrate the most.

I found this game to be very similar to pick a path books. It started out quite informative and benificial about the sharemarket and was explained reasonably well.
When we moved onto the second stage of the game - heading to the comet, it lost some of its punch.
For space enthusiasts it could be quite enjoyable, and not a bad game to pass the time.

In 2047, Tiberium has blanketed the Earth, which is now divided into zones based on the level of Tiberium infestation. The infamous Kane has returned to lead the Brotherhood of Nod in a massive global assault on the Global Defence Initiative and the few remaining Blue zones left on the planet. Only you can stop him. The fate of humanity - and the planet - is in your hands...