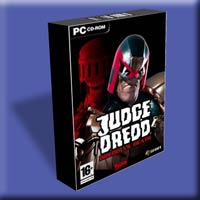 It will be a first-person shooter seen through the eyes of Judge Dredd as he patrols the mean streets of the stunningly realised future metropolis, Mega-City One. Dredd will find himself having to deal with the full spectrum of criminal behaviour, from littering and caffeine abuse to saving the city from the utterly evil Judge Death.

The game will also have extensive multiplayer modes, enabling ferocious splitscreen or online play and will use Rebellion's versatile new Asura engine.

Judge Dredd vs. Judge Death will feature a unique new storyline, but one that fits in perfectly with the continuity of the comic with a full cast of characters from the Judge Dredd stories, including Judge Anderson and the Dark Judges, and many of the famous Mega-City One locations.

The history and character of the Judge Dredd stories will be absolutely central to gameplay. For instance, because Dredd must obey the law he upholds and react according to the severity of all crimes, gamers won't be able to just blast their way through the game, shooting petty criminals at will (not unless they fancy spending the rest of their life breaking rocks on Titan).

I am a huge fan of the 2000ad comics and of Judge Dredd, so when I heard of the new game coming way back mid 2003 I was cautiously excited, especially since it was being made by rebellion who have a plethora of excellent games to their pedigree. There have been a few abominations made of the 2000ad licence, the movie being a particularly bad example of this, so would rebellion rise to the occasion and put an end to the poop?

There are many features in this game that would make it both enjoyable and give it a high replay value, such as the arcade, deathmatch and story modes. Each having been completed to a certain level unlock cheats and characters that you can play as.

Side games
The problem is they all have a rather thrown together feel to them, the deathmatch levels feel like they have been included at the last minute and have many points to them that make it frustrating to play, such as respawning in the exact place you just died letting whoever just fragged you frag you again, this happened 8 times on one level.

The arcade levels, while enjoyable, quickly become repetitive and boring. The block war in particular is tiresome as you have to kill everyone on the opposing team, but as they respawn in odd places and tend to hide, after a while it can get irritating hunting them all down. This having been said the vampire attack game, when you unlock it provides an excellent target practice opportunity, and believe me you will need the practice for later levels. Handy hint: the best way to kill a vampire is an armor piercing round to the head, one shot usually does it.

Story
Well here goes, Judge Death and his pals have been broken out of their prison (really original) by their loyal death cult followers, they are now starting to judge Mega City One, blah blah blah you have to save the day Judge Dredd style. You have a variety of weapons at your disposal: pistol, shotgun, assault rifle, grenade launcher and the ubiquitous Lawgiver handgun. These are all needed in taking down perps, and busting zombie and vampire heads. Which you will be doing in excess. You will travel around various locations in mega city one, underground and even into dead world itself.

Nitty gritty time, the game play is similar to anyone familiar with Halo, you can carry two weapons at one time, some weapons have varying fire modes or ammo options (like the lawgiver). This isn't really an issue as you will probably use the lawgiver most of the time (until you run out of ammo). The actual ingame gameplay gets a little repetitive after a while with people more familiar with fps games (me) being able to see the ambushes and traps before they happen and lay down some protection thus saving oneself from harm. The enemies aren't the brightest and you can confuse them fairly easily by running around obstacles thus giving you a chance to shoot them at your leisure.

The game runs fairly well, although I experienced some slowdown with more than about 7 enemies on the screen and during explosions. On a P4 2.8GHz with a 256mb graphics card this is a bit below par. The graphics are strictly average for this day and age and the character models have an unusual feature that means when they die they flop around or even fly up into the air and bounce of the ceiling in a comical rag doll fashion, making them look more like thunderbirds than real people. The below par a.i. also means that the levels are easy to finish, with many enemies being run around unless you have to kill them to complete the mission. The boss characters are likewise disappointingly easy to defeat, Judge Mortis, Judge Fire, Judge Fear and Judge Death all were defeated in a fraction of the time it took to finish the level before them.

There are some good parts though. There are moments of genuine tension and atmosphere that draw you into the game, running around the mega mall, or under the old city, there are some truly enjoyable moments, as you advance through gloomy tunnels or smoke or steam filled corridors to the sound of growls and groans from the undead. Unfortunately they are few and far between, so you lose the suspension of disbelief. Dredd is as always stony and cool in all situations spitting his one liners as you challenge perps, although they do get repetitive, the amount that you have to challenge it probably would have been a good idea to include a few more sayings.

The Verdict
We-eell it's a mixed bag really, the bad and sometimes random gameplay really subtracts from what is for all intents and purposes a solid game, small graphic glitches mean that anyone with a slightly slower pc is gonna be playing it on lower resolutions and missing out on some of the more impressive texture effects (like the ever present rain). The rag doll models and the slow a.i. also let the piece down overall. However there are some truly cinematic moments of terror and apprehension, as well as some good graphics and tongue-in-cheek humour but not enough to redeem the game.

I'm gonna have to label this game "For Fans only" and advise you to wait till it's $40 at the game shop as I wouldn't pay much more than that. Fans of the comic may get a kick out of being Dredd and being the law but in the end buying a copy of the comic might be a better investment.

Let the blood of the wicked...
...quench your thirst for battle!

From birth, you've toiled in the fields, poor yet proud. But the evil king Krugs destroyed it all: your farm, your family, your firends. As something inside you dies, something else awakens - a warrior with a burning need for revenge.

As you battle your way through a vast world of mountains, deserts, ice caverns and dungeons, you'll forge a fearsome party to fight the forces of evil. But beware: as your power increases, so does the intensity of the combat!