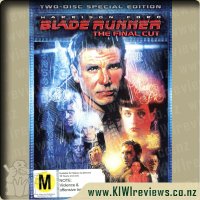 I had heard many people referencing Blade Runner, and heard people describing movies as Blade Runner-esque, or Blade Runner-ish, so it seemed like a film that I needed to see. Having seen it now, I have no idea why this is a classic movie.

Perhaps it is because of its age; perhaps it predates all other "cloning", or "genetic modification" films, but this film failed to truly engage me. The overarching premise did pique my interest, but it lacked the creativity to make it believable. For the Nexus 6 clones, it was just a series of unfortunate events. Harrison Ford did one true act of detective work, which then led to him finding one of the clones, and then the other, and then the other, etc. The film flowed on pure coincidences that the protagonists and antagonists always seem to be within earshot of one another, and interact with the same people.

The idea of clones being created superior to humans, and being subsequently outlawed due to fear, is a relevant plot line that follows a lot of fears that still exists now. But from that initial premise, the plot lost all direction, and failed to sufficiently explain itself.

This film fell well below my expectations, and I found myself cringing throughout.
22 years after its inception, it is safe to say that this film has not aged well.

Blade Runner is one of those movies that is very strange but is a classic. I had never seen it but my husband had vague memories of it (and after watching it I knew I had watched it years ago) and so we grabbed a copy of it on DVD.

We've owned our copy of this for just over five years and only watched it two times. The first time was because we were watching our movies alphabetically and the second time was because my mum had never seen it. I still find it a very confusing movie and found it hard to understand at least half of what was meant to be going on. The acting is good though, I'm pretty sure.

The imagery is pretty stunning despite it being very dark and dull. This is a very slow film though, so if you are after a lot of action this isn't the film for you as it doesn't really speed up until the last half hour. The special effects are well done, but a with any movie set in the future I wish they didn't give a date, otherwise we should expect flying cars toi happen in less thn ten years (although you never know...)

A classic movie, one that needs a few times of watching to understand but worth the title of 'classic film'.