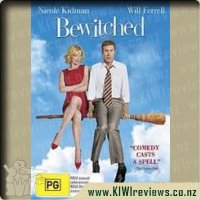 Jack Wyatt (Will Ferrell) is a difficult Hollywood star who is trying to make a comeback by playing Darrin Stephens in a remake of the series. When Jack sees the beautiful Isabel Bigelow (Nicole Kidman), he thinks that she'd be right for the part of his on-screen wife, Samantha and, not only that, she can twitch her nose beautifully. Isabel turns out to be even more appropriate than Jack could ever have imagined because she really is a witch who knows just the right spells to cast on egocentric actors.

Completing the cast are Michael Caine as Isabelâs father, Nigel who is concerned by his daughters interest in the mortal world, and Shirley MacLaine as the actress who is hired to play Samantha's interfering mother, Endora!

* Audio commentary by director Nora Ephron
* 6 Never-before-seen deleted scenes
* Why I love Bewitched featurette Cast & crew reminisce about the original TV show
* Casting a Spell Behind-the-scenes feature on the making of the movie with cast and crew interviews
* Bewitched: Star Shots - 8 behind-the-scenes featurettes on the cast of the movie
* Witch Vision Trivia Track fun facts on the making of the film
* Bewitched Trivia Game

Having grown up watching Bewitched on TV I was very excited to hear a movie based upon the TV series was being made. I was both excited and nervous to hear there was going to be a twist on it.

Isabel is a witch wanting to live a normal, magic free, life. Jack is a struggling actor who gets given the lead in the remake of the TV series Bewitched. He happens upon Isabel one day and gets her cast as Samantha after she does the perfect nose wiggle. Isabel learns more about what she wants as music and love go awry and Jack learns to care less about #1.

I really enjoyed this movie, both as a tribute movie of sorts and a movie in it's own right. There are some laughs and plenty of nods at the original series which was lots of fun for a fan of the show like me. Don't expect anything great of Will Ferrell and Nicole Kidman does a good job as Isabel, Michael Caine is rather fun as Isabel's womanising father. There is a good supporting cast, but the movie settles at being a fun movie for reminiscing about the original series.

I enjoyed this and it's a fun movie to watch now and again, especially when nostalgia sets in.

The Fellowship divides to conquer as Frodo and Sam, with the help and hindrance of Gollum, continue their way to Mount Doom.

Gandalf and Pippin ride to Minas Tirith to help defend Gondor while Merry remains with Eowyn and the other Rohan fighters.

Aragorn, Legolas, and Gimli seek aid from those that live in the Cursed Mountains.

All these battles have one goal in mind: distract the Eye of Sauron and buy Frodo a ... more...