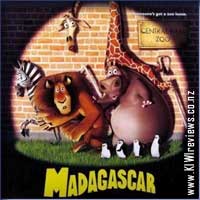 Alex the Lion (Stiller) is the king of the urban jungle, the main attraction at New York's Central Park Zoo. He and his best friends Marty the Zebra (Rock), Melman the Giraffe (Schwimmer) and Gloria the Hippo (Pinkett Smith) have lived their entire lives in blissful captivity, with regular meals provided and an admiring public to adore them.

Not content to leave well enough alone, Marty allows his curiosity to get the better of him and, with the help of some prodigious penguins, makes his escape to explore the world he's been missing. Alex, Melman and Gloria go after him, but before they can go wild in the streets, they are captured, crated and put on a ship to Africa... to be ultimately set free.

When those plotting penguins sabotage the ship, Alex, Marty, Melman and Gloria find themselves washed ashore on the exotic island of Madagascar. Now, these native New Yorkers have to figure out how to survive in the wild and discover the true meaning of the phrase "It's a jungle out there."

Madagascar is one of those kids movies that even as an adult you just can't help but watch. Miss 2 has recently started taking an interest in movies and will quite often ask one after a day at daycare, last night she asked to watch one "a animal one" flicking through our movies I stumbled across Madagascar, I showed her the cover and asked if she'd like to watch it, her reply "yes please Mummy, it's like animals at the zoo". My daughter loved this movie and has been talking about it all morning, I'm thinking we may just have to watch one of the sequels this afternoon. Her highlight of the movie seems to be the lemurs singing "I like to move it, move it" which she has been dancing around singing all morning, while asking to watch her "zoo animals" again.

The movie is set at the Central Park Zoo (which I think is pretty cool after having visited this zoo a few years back) which is where the animals live at the start of the movie. The zooâ ™s star attraction is Alex, a very happy lion. During the day he wows massive crowds at the zoo with his crazy and clever antics, and then at night he spends time out with his very best zoo buddies, who actually happen to be a zebra named Marty, a hippo named Gloria, and a Giraffe named Melman. All of the animals have no idea what life is like in the wild outside of the zoo, but one day Marty he decides its about time to go and see the world for himself, and so he escapes from the zoo, his zoo friends take off after him, hoping to change his mind and bring him back to their home at the Central Park Zoo. The residents of New York aren't so welcoming to there animal visitors and so they all end up being shipped into the wild having to fend for themselves, and learning how to survive in the real world.

This definitely is a great movie for the young and old and demonstrates the true meaning of friendship throughout. It has quite a lot of jokes throughout that only us adults will understand. A very fun movie to watch with a great plot, the animals are great to watch and are well created with there own unique personalities, definitely one to watch with Miss 2 again, she even managed to sit through the whole movie which doesn't happen often!

Another one of those kids movies that I really enjoyed Madagascar was a great movie and the sequels that have come out after it are just as good.
The characters in this movie are great my favourite being Ales the lion who loves meat of course and Melman the giraffe who is just a bit funny.

The movie follows the four characters Melman, Marty, Gloria, and Alex. The animals dream of being in the wild outside of the New York city zoo. Marty makes a break for it and his animal friends follow him to convince him to come back to the safety of the zoo. The zoo decide they must really want to be in the wild so ship them back to Africa and end up in Madagascar thanks to a team of ninja type Penguins.

Madagascar is sure to create lots of laughter in your house with lots of music and lots of interesting characters.

When Madagascar first came out I was a Primary School teacher without any children of my own. I hadn't seen the movie just all the ads. I took my class to the zoo and the moment they saw the lemurs the children starting singing "I like to move it" from the movie. This sold me on the movie and I had to go to the theatre that weekend with a couple of friends to see it.

I loved the movie. There was lots of adult humour in it. The parents were all getting strange looks from their children for laughing at parts the children didn't understand. Children of all ages enjoyed it. Now I am a parent we own it on DVD. This is the only movie my two year old will sit through. She loves the animals, the music and even gets some of the jokes. My four year old will often request to watch it and often narrates it for us. Thankfully it is a movie that my husband and I don't mind watching over and over.

One movie I never thought my kids would watch...Madagascar came on the tv and my kids went quiet first time ever for a movie. They watched the whole thing and wanted more. I have had to buy the DVD for them and they have watch it over and over again.

I love that the animals look child friendly and fun, not scary looking to scare off the younger children. The story line is really good, one friend wanting to explore the wild and the others heading out to find their crazy friend and finding something exciting. This movie I can sit and watch over and over as well I pick up more of the adult parts to the movie each time. I have however had to talk to my kids about the skeleton in the tree which doesn't bother me.

My children are 2 and 4 and I have asked them a few times why they like it, my son (2years) loves the penguins he is in love with them and every time the jump up though the hole he screams with excitement, my daughter who is 4 just loves Melman.

I really recommend this movie as a family in home movie with popcorn and all, there was never a dull moment in our house with this movie, we now have the 2nd one as well.

Madagascar is my daughter's favourite movie of all time. It has everything she could wish for. The story is about animals, who act (for the most part) like people. They go on an adventure and meet some cool animals (some of the kid's favourites). Plus the stars of the movie, really are the penguins who rock!

In fact, Penguins of Madagascar is a spin-off sitcom from this movie. And she loves that show too. She can just about name all the episodes that exist or at least give you a break down of the plot.

I have lost count of the number of times we have watched this film. Its a really good endorsement though, that she doesn't tire of it. We'll sit down on a rainy day, with a bowl of pop corn and a duvet and go on an adventure with Marty, Alex, Gloria and Melman.

This is a great family movie, loved by kids of all ages. Some of the best characters are the penguins and king Julian for their witty humor. The movie illustrates the power of friendship despite differences. All of the friends go to great lengths to help each other, even to the point of endangering themselves.
Younger children will giggle and miss most of the subtle cultural references, but adults and older kids will pick up the subtle nuances in the film. A very enjoyable movie that will be watched and re-watched.

My mum, my hubby and I took our 3 kids to this extremely funny movie. We all loved it, including my fidgity 3 year old. Kids never took their eyes off the screen. the story was great and the animals and the casting of their voices were perfect. Great, funny movie for all ages!

Took my 6yr and 8yr old nieces to see this movie.

Their eyes stayed glued to the screen throughout, which is a good sign. I found myself giggling frequently at the hilarious jokes of which most of were aimed at adults. The quad of psychotic penguins were a scream! David Schwimmer as the voice of Melman the overly cautious giraffe was cast perfectly.

It was a very funny movie, with a good plot. I would definitely recommend it to not only children, but to adults too.

Score: 8.5
Product reviews for listing 8589: The Way Back
Directed by Gavin O'Connor