ProdID: 4988 - Ratchet and Clank: A Crack in Time
Developed by Sony Computer Entertainment 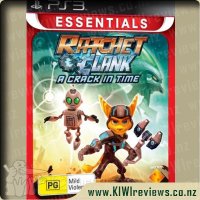 Ratchet and Clank: A Crack in Time product reviews

After discovering that lovable robot Clankâ ™s disap­pearance was engineered by Dr. Nefarious, the Wrench-swinging Ratchet races to save his best friend. Along the way, both will finally uncover the hidden truth behind their origins, and discover their ultimate destinies. As the duo come closer to reuniting, theyâ ™ll have to ask themselves the biggest question of all: Do Ratchet and Clankâ ™s destinies lie with each other? Or is it finally time for the universeâ ™s greatest duo to separate for good?

If you havenâ ™t played Ratchet & Clank before and are new to this successful franchise, prepare to be immersed in hilarious action-packed galactic capers and discover how time travel will entertain you in ways never before experienced.

Powered by Insomniac Gamesâ ™ fourth-generation PS3 technology, Ratchet & Clank: A Crack in Time will continue to bring the experience of playing your own computer generated animation movie to PS3. Expect all the laughs and witty banter of a Ratchet and Clank title, as you enjoy all-new space gameplay that gives players the opportunity to engage in space battles, explore the surrounding star system, and discover hidden items and collectablesâ¦ Youâ ™ll come head-to-head with a brand-new cast of baddies, and some old favourites, and obliterate them with cool new weapons and abilities.

If you are a fan of the Ratchet and Clank series then you will not be disappointed with this addition to the series.

We join this wonderful duo who have been separated from each other, who are trying to work their way back to each other whilst learning more about their pasts. As always the evil Dr Nefarious is there trying to take over the universe and trying to control the ultimate power, time itself. The story line is great and answers some of the bigger questions surrounding our duo.

During game play you upgrade weapons and your ship, the ship part can get a bit irritating but worth it. There's plenty to do, the golden bolts lie hidden so there is the search for those, there is the gladiator games as always and then you search for the Zoni, who you need to collect to upgrade your vessel (some can be very time consuming and irritating trying to catch them. The main game play is good with plenty of features so that each character plays well on their own.

For what is said to be the final in the Ratchet and Clank series, you can be assured it goes out with a bang.

The ancient game of secret symbols is a classic strategy game with hidden mysteries as old as the pyramids! Take turns placing shapes on the board to reveal 9 different patterns. The more complex the design, the more points you score.

May be played by 2 players or 2 teams.