Soundtrack: Queen of the Damned review 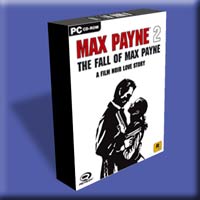 In 2001, Max Payne arrived to set the benchmark for action gaming, earning countless awards and revolutionizing the genre with cinematic combat sequences fuelled by the groundbreaking use of slow motion and compulsive narrative-driven gameplay. Now, working together with Rockstar Games' New York-based production team, Remedy has combined Max Payne's hallmark gameplay with all new innovations and unmatched production values. Max Payne 2: The Fall of Max Payne is set to raise the bar for action games all over again when it's released fall 2003.

FEATURES INCLUDE:
Storyline - a violent, Film Noir love story between a cop and a femme fatale murder suspect, between Max Payne and Mona Sax. Dark, tragic and intense, the story is a thrill-ride of shocking twists and revelations.

Max Payne's signature slow motion gunplay has been improved on every level. Get ready for Bullet Time 2.0.

New guns and new moves make action more cinematic and intense than ever before.

Max Payne 2 picks up after the events of the original and Detective Payne quickly finds himself in a world of hurt, again. Several characters and locations from the original make an appearance which helps add stability and familiarity to the game. The plot itself is quite good and has enough twists and turns to keep you interested until the end.

The graphics engine for Max Payne 2 is simply superb. The textures are clean and crisp, the character animations are realistic and smooth, and the full screen special effects are very well done. The physics system is very impressive as you can knock over almost anything and the characters react realistically when they fall. The in-game cinematic sequences are very well done and have a movie like feel.

The enemy AI was reasonably good and made use of cover but there’s always room for improvement. The game contains a decent number of weapons that allow Max to enforce the law and punish the bad guys. Max can even dual wield several of the weapons for double the payback.

Controlling Max is a breeze but the first thing you’ll want to do is bind the bullet time combo option to the right mouse button. This option activates bullet time based on whether Max is moving or not, if he’s moving a bullet time dive will occur in that direction, otherwise standard bullet time is activated. For those who haven’t played the original game, bullet time slows down the action similar to the slow motion effect in The Matrix. While in bullet time however, you can still aim at normal speed so it’s great for taking on multiple opponents and dishing out copious amounts of police brutality. For those of us who thought bullet time couldn’t get any better, we were wrong, quickly dispatch some bad guys while in bullet time and Max will sink deeper into the zone and the action will slow down even more.

You’ll need a reasonably new video card to make full use of all the games features but my Intel 2.4Ghz and Geforce4 Ti4200 handled the game easily. I personally find first person shooters to have little replay value as nothing changes except for the difficulty, but I must admit I found myself wanting to play this game again which was a nice change.

Overall, an excellent game worthy of the Max Payne name.

Finally, the truth - the most explosive Cahill secrets revealed!