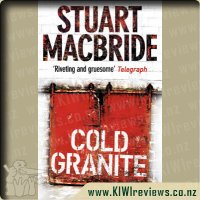 It can be grim in Aberdeen. But now it's sheer, bloody murder. Aberdeen, oil capital of Europe ! Christmas is coming, cold, dark and wet, bringing death with it. It's DS Logan McRae's first day back on the job after a year off on the sick, and it couldn't get much worse. Four-year-old David Reid's body is discovered in a ditch, strangled, mutilated and a long time dead.

There's a killer stalking the Granite City and the local media are baying for blood. If that wasn't enough, Logan also has to contend with a new boss, DI Insch, who doesn't suffer fools gladly and thinks everyone's a fool, and his own ex-girlfriend, the beautiful but chilly Isobel MacAlister, who also happens to be the chief pathologist. The only good news is WPC 'Ball Breaker' Watson, Logan's new guardian angel. The dead are piling up in the morgue almost as fast as the snow on the streets, and Logan knows time is running out. More children are going missing. More are going to die. If Logan isn't careful, he's going to end up joining them.

I know I must be weird but I love this type of book, it is not the best subject but it does happen and Stuart MacBride keeps it real, he describes the gory details and there is no sex scenes which a lot of the authors seem to think that they have to include.

What I also liked about this book is that the police are portrayed as normal people who make mistakes but then when they have to review what they know the reader is still wondering who the culprit is but then you get to follow as they then move around and get the guilty person. There is a bit of bad language but then there is also some funny parts.

As a mum I would be horrified if this were to happen to my child and try and warn the kids about being careful who they talk to and how the trust them and found that the hard topics were well written, it didn't feel like I was reading someone trying to be funny when they should have been serious. I would recommend the book to adults as some people would get nightmares from the topics discovered.

As a young girl, Ani Choying escaped her violent home for a monastery in Nepal. One day, an American jazz guitarist heard the young nun sing and was so enthralled by her voice that he recorded an album with her. The pay cheque enabled Ani Choying to open the Arya Tara School, just outside Kathmandu, offering shelter and education to sixty disadvantaged girls. Ani Choying now tours the world giving concerts, driven by her desire to help her young Nepalese charges. In Singing for Freedom, she tells her shocking and inspiring story.