« Cosentino: The Magic, The Mystery, The Madness review 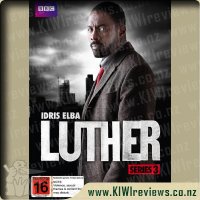 Disclosure StatementFULL DISCLOSURE: A number of units of this product have, at some time, been supplied to KIWIreviews by Roadshow (NZ) Ltd or their agents for the purposes of unbiased, independent reviews. No fee was accepted by KIWIreviews or the reviewers themselves - these are genuine, unpaid consumer reviews.
Available:
December 2013

Luther is a British BBC crime drama TV show, starring Idris Elba as a near-genius murder detective whose brilliant mind can't always save him from the dangerous violence of his passions.

This series sees a twisted fetishist targeting young women in London. Luther is convinced the man will strike again, but when the detective is ordered to investigate another case, the chances of catching the killer start to fall. But Luther's biggest threat could be closer to home, when it emerges that his own colleagues are willing to break every rule in the book to bring him down...

Elsewhere it looks like Luther might have finally found love again, but is he ready to leave his past behind? Finally, when a vigilante killer embarks on a crusade to punish criminals, Luther is forced to confront his own sense of morality. Can he walk the line between right and wrong and do his job or has he finally met his match?

The main reason to watch "Luther" is to see Idris Elba inhabit the role of troubled London cop John Luther with effortless skill and abundant charisma.

This is a well done show but the problem is that the show doesn't rise to it's full potential, and thus I can see why it didn't last long, which is a shame. Luther is an unconventional detective who tends to go rogue and ends up with good results, he may annoy those who he works with but there is no better job for him than this job. The acting in this is really superb, some of the best that I've seen on TV but none of this manages to save the show.

I often wish "Luther" would just embrace its smallness -- not that the murder of human beings is small, of course (and it's not "Luther's" fault that I am exhausted with serial-killer shows, but that's one more reason to wish the show had some original tricks up its sleeve). But it's hard not to come away from the show thinking that a more judicious and focused approach could have kicked this third (and quite possibly final) season up a notch.

Season Three of Luther is only a total of four hours and would have done much better had it not tried to cover as many bases and tie any loose ends. This time around, Luther tracks two different killers, attempts a romance (which is not done as well as it could have been done), and is also investigated for possible corruption. It's too much to squeeze into just four hours of screen time and makes it less enjoyable than it could have been.

Luther is still a good show and Elba does a great job, whilst the episodes left me wishing they had been done better I was still left wanting more.

The best-selling book by Caleb Carr is the basis for "The Alienist," a psychological thriller set amidst the vast wealth, extreme poverty and technological innovation of 1896 New York. A never-before-seen ritualistic killer is responsible for the gruesome murders of boy prostitutes, and newly appointed police commissioner Theodore Roosevelt calls upon criminal psychologist Dr. Laszlo Kreizler, newspaper illustrator John Moore and police ... more...