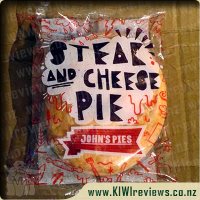 This pie is awesome, the reason for this very short statement is that for the price of this pie you get a steak and cheese pie that can out do many other worth more and that has to be awesome. The gravy inside the pastry coffin that is this pie mixed with the steak and cheese bathing in it's glory really is great on the tastebuds, it has a good combo of all ingredients and it is tasty.

I really don't know what else to say about a cheap steak and cheese pie apart from that I wasn't let down at all, it tasted great and the price was really good for what you got, there isn't too much you could ask for really, so the only question is why haven't you tried one yet?

Hopefully these pies make their way out of Auckland and Waikato to other parts of the country as it is a crime that you can't find these everywhere.

For it's price point, this is actually a very good pie! I would happily eat one of these over any other two under-$2 pies on the market. It's not the biggest pie you'll come across, and it is fair-square in the budget range so you can't expect premium gourmet fillings, but for a quick grab'n'go snack it certainly held it's own against any other cheap pie I can recall eating... especially those that proved to be 'memorable' for all the wrong reasons.

My only slight gripe with this pie was that it wasn't any more, or less, filling than any other budget pie... with the catch-phrase "More Pie for Less Bucks" I was hoping, perhaps a little naively, for a pie that was more than a quick snack. Still, two of these fresh from the warmer heading off for a drive to the big smoke north of the Bombays was still a satisfying road-breakfast when washed down with a big can of something fizzy and caffeinated.

Overall, quite a surprising pie for me... anything under the $3.50 price point is usually a mess of Mystery Meat with something resembling custard for the cheese... this was actually a meaty pie, albeit a quickly eaten one. I was impressed to find actual chunks of meat in there too, when all I was expecting was a slightly-jellied mince. Well worth considering if you feel the need and this is what's in the warmer.

Just before being given a bag of different pies to review I won a Facebook competition on the John's Pies page. My prize was a box of their pies in three different varieties including steak and cheese. This was my favourite variety from the box but I noticed my husband didn't touch them until all the others were gone and then they suddenly disappeared. Whether it was because he didn't think he would like them or he just preferred the others he didn't say. I suspect it was a case of you don't know how good something is until you try it.

The saying is you get what you pay for. With John's Steak and Cheese Pie I was expecting something very budget so I was pleasantly surprised. The steak was tender and there wasn't too much gravy. My only gripe was that the cheese was all down one end of the pie so for half the pie I didn't taste any cheese and the last couple of mouthfuls were predominantly cheese.

Steak and Cheese pies I am not a fan of, I have never liked them, sometimes that can just come down to the brand and sometimes it's quite simply the pie.

This is a good sized looking pie and looks like a good, standard, well priced pie. I split half the pie with my husband since I knew that he would easily eat it. My husband thought that it was really nice but needed a bit more steak in it, other than that he would buy and eat it again.

I, on the other hand, didn't like it at all and for myself, found that it has a bit of an after taste that I simply did not like at all. I wouldn't eat this pie again. The gravy wasn't that nice, the meat was a little too tough and there wasn't enough meat in this pie at all.

I wouldn't eat this again but my husband happily will.

For years, when I was little, I used to think of Steak and Cheese pies being my second-favourite flavour, but now, I think that it is my new top-favourite! The meat was delicious, it wasn't chewy and it made a nice contrast with the cheese, so maybe it is this contrast that has made me like this pie even more, who knows?

This is a flavour that I would love to have more of, so whenever I have the money, time, and hunger for pies, I might look for these pies at the shops! There also seemed to be another gooey ingredient in the pie, it seemed to be some sort of slightly reduced meat juice, but whatever it was, it added a little bit of moisture to the pie, which balanced the contrast between wet and dry, and it also seemed to make the steak less tough.

For simplicity's sake, here is the short version of what I think of this pie. The taste was good, it was very flavourful, and the steak itself was awesome, not very chewy, and it wasn't bland. The fillings were great, the fact that the steak was cut in cubes meant that the fillings were mostly solid; so good news truckies, it is less likely that you will spill your pie all over your pants!

The pastry was reasonably firm, although maybe a bit on the soft side, but was very delicious and was quite nice to have on it's own. Overall, awesome pie, now my top favourite flavour!

The main thing I look for in a Steak and Cheese pie is a good meat to gravy ratio. I took this pie to work with me yesterday to have for lunch. Unfortunately I forgot all about it and it sat in the fridge overnight. So I ended up having this for lunch today instead. I took it out of the packet and since it was well de-frosted and had no microwave instructions, I just guessed at 2 minutes on high.

After cooking, I took it out of the microwave and then cut into it. The gravy was thick and a rich brown colour. There was a definite cheese sauce present though it was mostly down one side of the pie. The pastry was soft and flaky thanks to being microwaved. It still managed to stand up to being picked up and held once it cooled down.

The meat to gravy ratio was not too bad for the price. I think I counted 8 pieces of steak. The meat was pretty good quality. There was no noticeable hard pieces and minimal fat. The meat was firm to the bite. The gravy was tasty and the cheese sauce was pretty good as well. Overall I was impressed, considering the price it was a decent sized pie and had a good flavour.

For Generations, Whittakers have had a passion to create world class chocolate, and now they have launched the New Zealand Artisan Collection. Combining the world's finest cocoa with the most delicious ingredients sourced directly from New Zealand's finest artisan producers.