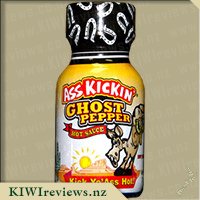 Disclosure StatementFULL DISCLOSURE: A number of units of this product have, at some time, been supplied to KIWIreviews by International Foods or their agents for the purposes of unbiased, independent reviews. No fee was accepted by KIWIreviews or the reviewers themselves - these are genuine, unpaid consumer reviews.
Available:
via Online Store

Our Ass Kickin' Ghost Pepper Hot Sauce is sure to call out to all the hot sauce fanatics across the globe.

At over 1,000,000 heat units, these Ghost Peppers (Bhut Jolokia) are one of the hottest peppers in the world. EXTREMELY HOT!

I am an avid lover of hot sauce and add lots of hot sauce to my meals normally. I was really excited to try this product as had heard it had quite a bit of heat to it. I find that different brands call their sauce "hot" sauce but usually I struggle to find the heat in the product. Well, this product lived up to what I had been told. I was at first quite hesitant as to how hot this would be and thought before I pile it straight onto a meal (which is what I normally do) I might put a bit on my finger first. I think that was a great move.

I put a tiny bit on my finger and gave it a taste and my goodness was it hot and immediately begun to tingle my tongue with its heat. I knew then and there, that my palette wouldn't be able to cope with this on its own. I had intended putting some with my chips but because of its strength of flavour I decided to mix it in with a bit of mayo. This worked out perfect and it took the heat in the sauce down and I found it quite enjoyable. I found because of the wide opening of the bottle that I struggled to get just a small amount to come out. Yes it is thin in consistency but it makes a large amount pour out quite quickly. I think perhaps it needs a smaller opening or maybe even a small spout so you can easily control the amount it pours.

All in all this sauce definitely lives up to its ass kicking ghost pepper hot sauce title. At $4.00 I think the price is reasonable as you only need a small amount in your meals so I would definitely buy it again.

I want to premise this review by saying that I was not the one that tried this hot sauce, but in fact my husband, who has yet to find an amazing hot sauce that blows his socks off, so seeing this come up for review I was excited for him to try it.

When I received it, I was struck by the size of the bottle and the pictures. The bottle is very little, and although you do not need a lot of this sauce, most often people are looking for something that will last more than a few weeks, which is how long I estimate this would last with my spice loving hubby. The packaging is great - with a donkey (ass) kicking ass! Definitely made us laugh!

Opening the bottle to have a smell before I handed it to hubby for the taste test, I could instantly "smell" the spice to it - it made my eyes water, so for once, I was glad I WAS NOT taste testing this one. Hubby was super excited though - the more on fire his tongue is, and the more he sweats, the more he loves it!!

For dinner that night is was fish and chips (homemade) so in replacement of his normal chilli sauce, hubby splashed a little of the ghost pepper sauce onto his plate, and proceeding enjoy his meal. I knew that this sauce was hot when I saw his eyes bulge, and golly come out of his mouth. This sauce literally stopped him in his tracks - which few have been able to do. To say he enjoyed it is an understatement - he really enjoyed it - so much so it went straight on the shopping list to buy. As I remarked above - a bigger bottle would be handy, and I would like to see it as an option. I very much recommend this to people wanting a burning, frothing at the mouth husband too

My husband and I both love hot and spicy foods and were intrigued to try this new Ass Kickin' Ghost Pepper Hot Sauce. The bottle is extremely small at .75 ounces but does look pretty cool with a picture of an ass kicking ass! Made in the USA with Bhut Jolokia Peppers (Ghost Peppers) we knew this was going to be one hot sauce. The bottle was easy enough to open and the opening was relatively large so you could get a good sized serving... which could prove dangerous!

I first tried some on a piece of pizza to spice it up and wow, this is one hot sauce! It would definitely be the sauce to add to one slice to make a fabulous game of pizza 'Russian Roulette'! The sauce itself has a relatively runny consistency and reminds me vaguely of a smokey tabasco sauce, but with burn, lots of burn!! This sauce has a very hot and impressive burn that engulfs your whole mouth. The heat doesn't abate for sometime and my husband tried 2 other hot sauces we have, straight after the Ass Kickin' Ghost Pepper and couldn't even taste them!

We also tried them on burgers and this kick ass sauce definitely too the burger to a new level, so very tasty! This sauce is one of the hottest that I have tried and we will be buying again in the future. It would be a bonus if the bottle was larger as the small bottle didn't last long in our home! Definitely buy if you like hot sauces! I did my usual heat-test trick when I opened this little bottle: this gives me an idea of how much I can use before I add too much and spoil a dish. Experience has taught me to be cautious and hold my breath when I open any container of hot spices, especially if they are in liquid form, as the effect on the nose and the back of the throat when you inhale are much stronger than on the tongue. I am glad I followed my own advice as the droplet I tasted was enough to tell me that this was one of the hottest I have ever tried. And I had just the meal organised to test it out.

Really hot chilli goes wonderfully with egg dishes: it cuts through the richness, especially if you are using free range eggs, and adds that great tangy edge to them. I don't like my eggs too bland or too rich, and chilli addresses both of these issues. I had planned scrambled eggs (on toast of course!) with summer vegetables - a nice combination and quick to prepare. I added the sauce to the eggs after I had whisked them in the pan and before starting to cook them as that ensured that there would be no "hot spots". I tried four drops for each egg, although when I tasted the result I think I could have used five (or even six for a noticeably hotter effect). But the result was as expected, nicely spiced and tingly on the tongue.

The bottle is quite small but as a little goes a long way I can see it lasting for some time. I love the packaging: the double meaning of "ass kickin'" made me smile as the image of the little donkey and the full sun make it quite clear what the real message is! (Or does it?) The lid comes off easily once you have removed the plastic seal: an important design feature as some lids come off awkwardly, and the contents may spill. This is one item you do NOT want to land in your face or over your hands. I rubbed my eyes once after I had been handling a chilli product and certainly learned my lesson.

We had wraps for lunch later in the week - the main ingredient was chopped avocado which needed using up so I added some Greek yoghurt (plain), parsley, mild cheddar and a few drops of the hot sauce before rolling it up. The sauce was just what the other ingredients needed to add interest. The result was tasty, not too hot (although the heat is negotiable!), but with enough kick to transform a healthy but not very interesting snack into a delicious treat. This is one product which has earned a place in my larder. As the working week was coming to an end, I noticed that my enthusiasm for cooking had well and truly dropped, so I ended up making some simple kumara chips. thinly sliced, and coated in cooking oil and rock salt, I baked and grilled them until that had the consistency of a deep fried french fry. For sauces, I had two tomato sauces, one unaltered, and the other mixed in with a generous helping of Ass Kickin' Ghost Pepper Hot Sauce.

As with the original variant, the plastic wrapping was very easy to remove, and the bottle has a wide opening, giving little control over the amount that you pour out each time. Similar thin consistency to the original, the sauce is more opaque (less translucent) and has a lower presence of seeds. The flavour is rather smoky, reminiscent of a tabasco or smoked paprika spice.

The sauce provides quite a more significant "burn" compared to the original, and the heat lingers a lot longer. Most of the heat focuses at the back of the palette; though it will give the taste buds on the tongue a good whallop, the heat definitely subsides a lot quicker than at the back of the throat. When I had a quick taste of the sauce alone (just a quick chug, I'm crazy like that) the sauce does give off some fumes, which can lead to a bit of coughing, so I'd definitely recommend ensuring it is properly mixed with food before consumption.

It would be nice if the bottles were slightly larger, as the product will only last a few uses for me, but I was pleasantly surprised by the level of heat this little sauce provides.

Mushrooms are super good for you. Low in fat; high in fibre and protein. They are 100% natural, plant based and vegan friendly. They contain no nasty additives and no steaming is required.