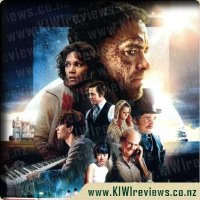 From acclaimed filmmakers Lana Wachowski, Tom Tykwer, and Andy Wachowski, the powerful and inspiring epic drama "cloud atlas" explores how the actions and consequences of individual lives impact one another throughout the past, the present and the future.

Action, mystery and romance weave dramatically through the story as one soul is shaped from a killer into a hero, and a single act of kindness ripples across centuries to inspire a revolution in the distant future.

Cloud Atlas wasn't a movie that I was too interested in, based upon the trailers, but my wife was very keen so I ended up watching this with her and really enjoying it.

Cloud Atlas took a bit of getting used as it keeps jumping between past, present and future, and different pasts and futures. There are about five actors who play several characters each in this film, each one is basically a reincarnation of the same soul (one can assume). Each one then has similar characters in each lifetime and that makes it a bit easier to follow each one.

The make-up, brilliant!. Not only did they need to make each character they played look different and unique to the others but they also needed to ensure that they fit in well with their settings. Not only did they have that to go with, but we also have some actors playing a character of the opposite gender, and even changing their ethnicity, ie. one Asian actor looks like a white American as one of her characters, and Hugo Weaving plays a female matron. Some it's easy to see who is who but there's still some surprises awaiting you in the credits.

I really liked this movie and am glad to say we now own it.

Cloud Atlas is a film adaptation of the novel by the same name, when I saw the trailers for this I wasn't sure what to expect. I haven't read the book yet but after watching Cloud Atlas it is a book that I am keen to read.

Cloud Atlas can take a bit of getting used to as it jumps backwards and forwards through time. There are about five actors who play multiple characters in this film, each one a new reincarnation of the same soul. Some have very similar roles each time, for instance Hugo Weaving is the bad guy in each of his roles, whereas Halle Berry is the truth seeker and Tom Hanks varies from bad to good.

The special effects are simply stunning, from the past, travelling on a ship across the ocean to the future where the world is slowly flooding to even further in the future where society has changed completely. Everything flowed wonderfully and some of the imagery was fantastic.

Makeup deserves a mention here. Not only was it required to change the actors appearance based upon the time that they were living in and their society, but other things as well. Hugo Weaving plays a part of Tom Hanks 'imagination' in one time period, but several of the actors swap genders. There's a few cases where it is obvious which person is reincarnated as whom, but in others it took the end credits (where you see a photo of each person they played along with the actors name) for it to click as to who was who.

I thoroughly enjoyed this movie and especially the reincarnation side of it all, how some go from bad to good, good to bad, or are stuck where they are. I shall be owning this on DVD at some point and shall be reading the novel as well. Stunning film.