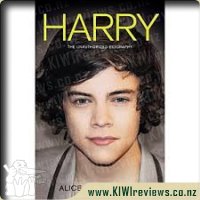 What happens to the boy next door when he becomes part of the planet's hottest boy band?

When Harry Styles auditioned for the X-Factor, little did he know he'd soon be leaving behind school, his Saturday bakery job, obscurity and an ordinary life. One Direction made it to the final and won a record deal, and it wasn't long before Harry's face covered bedroom walls up and down the country.

But how did Harry cope with his new-found fame? And what happens when you take America by storm in a 'British Invasion'?

With gorgeous green eyes and curls that send girls wild, Harry has found himself surrounded by beautiful women. But what's the truth behind the rumours? Here, his relationships with Caroline Flack, Emily Atack, Taylor Swift and the married Lucy Horobin are laid bare.

And what next for Harry and 1D? This book will give you the low down on how Harry and the boys are set to take on the world.

I won this book in a Penguin Books competition at the beginning of the year, my 11 year old daughter is One Direction mad so I entered knowing she would love to own a copy of this book. Her favorite direction-er is Harry so was an ideal book for her for her birthday. When I gave her the book she squealed with delight and spend the next couple of hours trawling through all the facts and getting all hyped up over the pictures of Harry.

I thought it was a little too soon for any of the boys to be releasing an Biography as they are barely past their teens and just starting out as a boy band. I don't often read biographies but ones I have read are from older celebs who have had lots of interesting things happen in their life rather than from young adults. As such I didn't think this book was all that great but I wasn't the one that had to like it.

The main thing in the book is photos, it is filled with them, I don't think there are many pages at all that don't have photos of the celeb. I thought a couple of them were a little inappropriate given the age of some of his fan base. I didn't think we needed to see him in his boxer shorts, or showing his bottom but other than those two photos the rest are fine.

My daughter found all the information really exciting, she found out Harry has the same birthday as her, and grew up close to where her Granny and Gramps live both things she found very exciting. She also liked knowing what his favourite foods are and things like that. There isn't much depth to the information in it, but there is definitely enough to satisfy young fans.

My family and I were invited to Lisbon, Portugal, to retrace the journey of the great explorer Vasco da Gama. He was the first European to reach India by sea and was apparently an ancestor of the Stiltons! But once we got on the boat, I learned that someone was trying to sabotage the voyage. Could I figure out who.