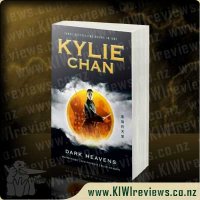 Emma Donahoe has just started her job as nanny to Simone, the daughter of rich businessman John Chen. She knows that Simone may be a target for kidnappers but she has no idea of just how dangerous her new job could be.

Soon she is drawn into a world of martial arts, magic and extreme danger, and the mysterious John Chen seems to be more than just a businessman.

Get set to be drawn into a fast-paced world of action as Emma learns about martial arts, discovers her own secret abilities, fights demons, and falls in love with a 3000-year-old Chinese god.

Having read a couple of Kylie's other stories, and finding them to be a worthwhile read both in terms of story and in sheer page count, having her first three books compiled into a single tome was, to say the least, a little daunting. However, time has a funny way of flitting past when you are lost in a really good book... and this was indeed a really good book! Three of them, if you want to get picky, but no matter how you look at it... I am hooked!

The biggest problem to re-released a set of titles is the "read it out of order" issue that, as a book reviewer, I come across a lot - getting 'captured' by a title further along the plot arch, and having to go back and read the early tales without that sense of "Ohhh, will s/he survive this cliffhanger ending?!" because... let's face it... you know already. Still, the journey is more important than the destination, more often than not, and this compendium was no exception. Though I knew some of the big "plot reveals" ahead of time, the tale of how the lead protagonist goes from "mere mortal" to "something supernatural" (with a BIG emphasis on the "something") was an enjoyable romp through the world that resides without and around our mortal world.

One of the big highlights for me, in reading this series, is learning so much more about the Eastern philosophies and mythos. There is such a long and varied culture in that part of the world, where contradictions are accepted and absorbed into the culture so easily. A great example is the character of The Xuan Wu... at once the God of Martial Arts, an eternal force of nature, the only Celestial dual Elemental (He embodies two essential Elemental Forces: Yin - the essence of cold, dark, death, femininity and softness, iconified as a Turtle Spirit - and Yang - the essence of life, warmth, masculinity, light and hardness, iconified by a Snake Spirit.) but also a mortal General who was Raised to immortality after winning a great battle. In the story, this dichotomy has a flag put on it by the central character - Emma Donahoe - and has it explained to her in such a way it is$ casually treated as "...one of those indefinable mysteries, that just 'are'..." - I love it!

With a weighty price tag of $34.99, this is not a cheap book, nor an inexpensive one... but considering you are getting the first three books from the looking-like-being a nine book saga (10, if you count the prequel Small Shen reviewed previously), then really you could see it as getting each title for less than $12.00 - that's almost 2nd-hand pricing, which is awesome when getting new-book quality. You're also looking at a bumper crop of around 900 pages of story, and 915 pages if you include the extra resources on the mythos, the glossary and suggested extra reading if you are keen to learn more.

This book is NOT short on action, tension, thrills and spills, plus more than a little blood - or whatever it is Demons have instead... but it's also not short on sexual tension, innuendo, and in a few places some almost-explicit acts... so it's not something I would suggest for anyone under the age of 14 years. Actually, I think that's a real shame, because I know my 12yr old son would LOVE the rest of the story! Looks like this will have to claim a place on my "time vault shelf" in the library - waiting for a time in the not-too-distant future when I can accept he's lost his innocence and can handle those bits. Truth be told, maybe I am being a little overly protective and it's already past that point, but still, can a father not wish?!

Overall, this is an astounding book, and I feel it has well earned it's place as the vanguard of a new fictional world... However, I find it disturbingly detailed, and can't help but wonder if it is an entirely fictional tale. Kudos to Kylie Chan for bringing wonder, and doubt, back into my worldview.

All the other little ducks had cute little names. There was Wade and Dip and Brook and Bob and even Sludgepuddle. But this little black duck did not have a cute little name. Oh, no! His name was Duck.

All the ducks tease Duck about his name. One day he gets the chance for revenge.

But does he take it?