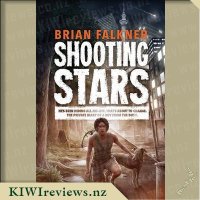 In 15 years, Egan Tucker has spoken to no-one but his mother. Escaping from an abusive husband, Moana (Moma) took baby Egan to live in the Coromandel bush. For 15 years, Moma taught Egan to survive, and instilled in him her code for a good life. A chance meeting with a DOC deer culler (JT) while out hunting, results in Egan finding his first friend.

This is the type of book where I wish there was a pause button on life. I just wanted to read it from cover to cover and not stop! It's times like this that I hate being a parent, wife, have a job and a life and wished that I did not need sleep as much as I do. It took me three days to read and that was trying to read thru tears last night as I was so tired. Today when I finished work I spread out on the couch and did not want to move (except had to pick up girls from school and then take them to swimming class) but the whole time I was needing to know what would happen next and could not wait to pick it up again.

I loved everything about this story. The characters, the easy flow of the writing, the various levels of meanings in the little every day things, the brutality of it and the share innocence of Egan. I liked how it was like reading a diary and how intimate it all seemed. I especially loved reading about his fears and loves and found myself laughing out loud quite a few times. I also enjoyed reading about his 'first experiences' like using a shower or phone and the simple way he explained everything. Even his discussion on finding his one true love was rather sweet - the whole thing was just fascinating to me.

I think, though I was most intrigued by 'Egan's Code of Honor'. Yes, it has been written in so many books, but I like how basic this version is and how it is explained so well. I plan to write it up on a board and have it posted on a wall so my girls will also learn from it and hopefully in time live by it. I only wish the world would adapt to this way of thinking we would live in such a better place.

The topic of domestic abuse was discussed so delicately, but yet it showed how easy it is to look the other way or hide it. I liked the way he second guessed his upbringing when being faced with the monster in real life not knowing what was true or made up. How easy it is to manipulate the truth with a few sweet words. How the darkness can blend into the light. It is written so well.

This story has really touched me. One minute I was on a high and the next I was left heart broken. It is a book I will be putting away for my girls to read, once they are older. I am also encouraging my husband to read it and will pass on to friends. Personally I think this is a book that should be read in high schools as it covers so many topics which are not really addressed in New Zealand that well. Reading about the runaway children and the lives they had escaped from was rather startling and when they discussed the various types of people who live on the streets was rather eye opening to the dangers they experience on a daily basis. Not to mention, life in the bush - such a broad range of subjects in such a awe inspiring book.

I have not got enough good things to say about this book and highly recommend that everyone should read it. It is aimed at Young Adults but honestly, I think everyone can learn something by it. I just hope it is made into a movie one day as I think it is that good (well that is until that ending!)

This was actually a difficult book for me to read. When I read a story I like to really get into it, and take the place of the protagonist. But the way that this book is put together, makes it very hard to fully immerse myself in it. This book is put together like a scrapbook, containing not only a mish-mash of "diary" entries from the protagonist, but also an assortment of lists, stories, poems, news articles, maps, and drawings. While it added extra layers, and additional point of view to the story, but kept pulling me out of the point of view that I was experiencing the story with.

The actual first person storyline that is revealed through the diary entries, starts off rather slow, but gradually improves in writing style, and becomes more emotive as time progresses. The story has several twists, emotional moments, and comedic elements, that are all brought about in a reasonably organic fashion. Certain aspects of the backstory do seem a bit unlikely (for example comparing education levels, and teaching resources available), but the emotional aspect draws you in regardless, and make you truly feel for some of the characters.

The plot direction pulls no punches, and covers such topics as vagrancy and domestic violence, while providing a bit of social commentary on the techno-centric lifestyles of the current generations. But the overarching repeated idea is that of needing a "code of ethics" in a world without religion and superstition. The use of the code is employed well, showing interpretations and effects, and repeating it enough times to drill the ideals into the readers mind. The ethical system is a great thing for a youth to come to terms with, while still understanding that not everyone has such ethics, but it's not our place to judge people.

I loved the ideas in the book, I just wasn't a fan of how it was revealed to the readers. While the scrapbook idea may seem "fun", it made the writing feel lazy, and I would have loved a little bit more inclusion of the supporting characters like J.T., Lauren, and Regina.

This is one of the most amazing books I have read in a long time. I think one of the reasons I particularly enjoyed it was because I read it in one sitting while sitting in the Coromandel bush in the early morning only kilometres away from where the first part of the book was set. This familiarity with the area predisposed me to enjoy the story as I recognised various place names and descriptions of the bush environment. What I was not prepared for, however, was the raw emotional appeal as the story progressed.

On many levels, I appreciated the way the story was presented. The framing of legal transcripts at the start and end of the book sets the scene for what is effectively a story about a horrific crime which colours the plot development. The inclusion of quotes from real authors (Ernest Hemingway and John Steinbeck) and frequent additions by Egan on his perception of life as seen through the philosophies his mother has instilled in him quickly establish him as an intelligent, creative and fundamentally good character. And the diary format used for the major part of the book gives the reader an intimate view of Egan's take on society as he comes to terms with modern technologies and diverse human relationships.

Although the book is intended for young adults, I felt the themes could be a little advanced for some teenagers. Personally I would see it as suitable for ages 14 and upwards; I would hesitate to recommend it for a younger child unless he or she was reasonably mature. Some of the content could be upsetting or even scary for a less mature youngster. For an adult reader, however, I would recommend it unconditionally. It deals with some very powerful themes and certainly made me stop and think.

The sections dealing with the street kids were sensitively presented, even more so as they emphasized Egan's extreme innocence and his fundamental generosity of spirit. Even the language was faithfully represented, with a seamless transition between Egan's educated speech and the colloquialisms of the street kids. The street kid gang members were shown as individuals, each with a back story depicting the damaged child behind the brash facade he or she presented to the rest of society.

Fundamental to the story is Moma's Code of Honour. This "Code" consists of 30 guidelines, but they could be condensed into three main messages - don't make assumptions, respect and care for others, and always be honest. If these guidelines are adhered to the person who lives by them will lead a happy, productive life. This does not mean the he or she will be rich or famous; it just provides the blueprint for being fulfilled and finding inner peace.

On many levels this book is a successful work. There is something in it for everyone - older teenagers, teachers, social workers, medical professionals, and anybody who has a social conscience. At the same time, the story does not preach: the style is fast moving and very accessible, and many New Zealanders will find the familiarity of the landscape is something they can relate to as I did. I will certainly be recommending it to friends and family.