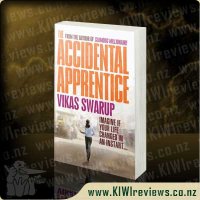 From the author of the book behind the blockbuster movie Slumdog Millionaire, a brilliant novel about life changing in an instant.

Life pivots on a few key moments. This is one of them.

Sapna Sinha works in an electronics store in downtown Delhi. She hates her job, but she is ambitious and determined to succeed, and she knows without the money she brings in, her family won't be able to survive. Little does she know it but her life is about to change forever.

As she leaves the shop on her lunch break one day, she is approached by a man who claims to be CEO of one of India's biggest companies. He tells her he is looking for an heir for his business empire. And that he has decided it should be her.

There are just seven tests she must pass. And then the biggest lottery ticket of all time will be hers.

Navigation: Kupe & Cook. An Ocean in a Mind and a Mind on an Ocean
Rating: 9.5

Having heard of the success of Slumdog Millionaire yet having not yet read the book nor watched the film, I thought I would at least give this book a try and see if this book was any good at all. While an easy read I feel more like it was a waste of my time better spent on other books.

The premise is pretty straight forward. Sapna works in downtown Delhi and live with her mother and sister in a flat that their uncle owns. One day while she is at a temple she is approached and offered the job of a lifetime. She is full of scepticism but when the threat of no home looms she takes the offer despite her misgivings.

This is an easy read, despite not really enjoying it doesn't require a lot of effort, the problem though? The feel from the book is pretty much that the author wanted to build on his success from his previous book turned movie yet fails dismally. There are too many plot holes, your good guys/bad guys are far too obvious and when it comes to the end it is all wrapped up too hastily.

While I will probably, eventually, get to reading Slumdog Millionaire, I'm not going to be excited about any future books from this author.