The Amazing Spider-Man vs The Lizard review 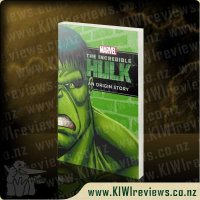 Disclosure StatementFULL DISCLOSURE: A number of units of this product have, at some time, been supplied to KIWIreviews by Scholastic (NZ) or their agents for the purposes of unbiased, independent reviews. No fee was accepted by KIWIreviews or the reviewers themselves - these are genuine, unpaid consumer reviews.
Available:
February 2013

Struggling to control the power within.

Dancing with Cranes: On location with a New Zealand wildlife film-maker
Rating: 8.8

Songs of the Dying Earth
Rating: 9.8

I never did get the larger version of this book, but I do know that this version rocks! I did happen to to notice that in the pictures, Bruce Banner's face kept changing, on almost every page in which he was human, he had a slightly different-looking face. The storyline had an okay feel to it, it was descriptive and allowed me to form a clear image of what was happening.

The book felt reasonably active, I wasn't dead bored all the way through, but I wasn't on the edge of my seat either. I have already read the book a couple of times and think I might read it one last time at the very least. I have a strong suspicion that if I found it cool, and I'm almost 13, then if someone, let's say, 8 years old were to read it, they would have a blast.

The price is awesome, it is very affordable and the book has about enough value to be worth that price. As for re-readability, well, I mentioned that is paragraph 2, it is tempting to read it one last time, but after that I might just keep it tucked away to give to my 4-year-old brother when he is old enough and has learned to stop destroying the books he is given,

Well my girls are totally into the Marvel books and The Incredible Hulk has been no exception. Miss Six is all about reading to herself and these chapter books are perfect.

Almost every page has at least one if not more colourful illustrations that link directly to the text on the same or adjoining page. This really helps with comprehension and has definitely assisted Miss Six.

The story line is very simple so Miss Six and Miss Four can follow the story with little difficulty. This is an Origin story so tells how Bruce Banner became the Incredible Hulk after being exposed to a bomb with a gamma core. The story has lots of soldiers with guns and tanks etc so would really appeal I should imagine to little boys.

I do think this Origin Story range of chapter books is a brilliant way to engage young boys (and in my case girls) into reading and I would definitely recommend this book for the ages of four years and up. At $13 it is a brilliant gift or reward.

Michael Seed 's childhood was nothing but a daily ordeal of unspeakable neglect, misery, and abuse from a father whose tyranny of fear stole Michael's formative years from him and drove Michael's mother to suicide. After years of silence, he now feels ready to tell a story that, though shockingly painful, is a testament to one human's remarkable ability to triumph over the most appalling of circumstances. Living with his adoptive parents, life ... more...