Aladdin 3 - The King of Thieves review

ProdID: 543 - Aladdin 2 - The Return of Jafar
Directed by Disney Classics 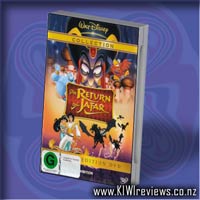 Although it didn't seem possible, the evil sorcerer Jafar - now the most powerful genie of all - has escaped from his lamp! And he has only one thing on his mind: revenge against Aladdin!

Meanwhile, back in the enchanting city of Agrabah, the outrageously funny Genie has returned from his world travels-and you will love his hilarious stories about his grand adventures. Now his friends need his help and his magic as they prepare to face Jafar.

From battling thieves on flying horses to dodging flames inside an exploding lava pit, it is up to Aladdin - with Princess Jasmine, Abu, Carpet and Genie by his side - to save the kingdom once and for all!

Personally, I thought the original Alladin movie could not be beaten. Even cartoons can suffer from Sequelitis - an inflamation of the creators ego - and this suffers from possibly the mildest case of this I have come across in the last decade.

With only 4 musical numbers, thankfully clustered together about a third of the way through, this has plenty of storyline but still caters to the kids, who seem to enjoy musical numbers more than I do. My son absolutely LOVES them... except when daddy tries to sing along. Then it's a chorus of "Stop that daddy, you sing funny." -rofl-

This episode in the Aladdin picks up shortly after the end of the first story, when Jafar returns thanks to the efforts of that self-centred parrot Iago. With a surprise twist, Iago ditches Jafar, literally, and returns to Agrabah to try and reclaim a position in the Sultan's palace by convincing Aladdin he has seen the light, and it wasn't his fault in the first place anyways.

With the intervention of a gang of thieves led by a bumbling idiot, Jafar is found and escapes his lamp, only to find that the bumbling idiot isn't quite the pushover he assumed. In the end, of course, the good guys win, but it's a mission and a half since Genie has lost some of his powers upon being freed, and isn't quite up to the task of taking on the most powerful being in the universe anymore.

Overall, I found this to be a great follow-on from #1, and if your kids enjoyed the first movie, they will undoubtedly enjoy this one too. Roll on #3!