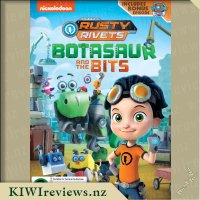 An engineer named Rusty leads a team of rescue robots. Together, they invent their way out of difficult situations.

Finding an animated show which can entertain all 3 of my children, for longer than 10 minutes can prove elusive some days. While we were watching a new DVD one day, we watched the extra bonus episode that was included for a new show - Rusty Rivets. Upon seeing this new show my children decided that they actually quite enjoyed it and wanted to see more. When I saw that there was an opportunity to review a new release DVD 'Rusty Rivets: Botasaur and the Bits' I quickly jumped at the chance to submit my request, I crossed my fingers and hoped that we would be lucky enough to be chosen.

When I unpacked the DVD my youngest squealed with pure excitement upon seeing the cover. The cover shows Rusty standing in the foreground, and his robotic helpers and a dinosaur in the background. There are 8 episodes of Rusty Rivets on the disc, and as an added bonus there is a Paw Patrol episode at the end. At an approximate running time of 94 minutes I believed this would provide just the right length to keep the children's attention captured. On a rainy afternoon we decided to snuggle up and see what adventures the team would go on.

Right from the initial menu on the DVD, we noticed how vibrant and eye-catching the colours of the characters and scenery were. We are introduced to Rusty who likes constructing items with help from his friends. My two son's favourite character, not surprisingly, was Botasaur, especially when he was able to soar. During each episode the children had various points they giggled at, and were clearly enjoying themselves, they were mesmerized by the inventions in each episode, but especially the ones that helped Rusty climb a mountain.

As a parent who usually ends up sitting watching shows with my children, I like a show that I can sit and watch easily, that doesn't annoy me after the first episode. I found that I was able to watch all of the Rusty Rivets DVD, and didn't mind when the children chose to replay it again for a 2nd time in a row. This show has themes of helping, sharing, problem solving and thinking before you act, I would personally recommend this for young children aged 6 years and under (however my 7 year old thoroughly enjoyed it)
We cannot wait to see what adventures and awesome inventions happen in future Rusty Rivets DVDs.

Roddy is a decidedly upper-crust 'society mouse' who lives the life of a beloved pet in a posh Kensington flat. When a sewer rat named Sid comes spewing out of the sink and decides he's hit the jackpot, Roddy schemes to rid himself of the pest by luring him into the 'whirlpool spa'.