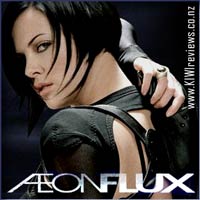 Based on the MTV animated series created by Peter Chung, "Aeon Flux" is set 400 years in the future, when disease has wiped out the majority of the earth's population except for one walled, protected city-state, Bregna, ruled by a congress of scientists.

The story centers on Aeon Flux, the top operative in the underground 'Monican' rebellion - led by The Handler. When Aeon is sent on a mission to kill a government leader, she uncovers a world of secrets.

Not really close to the original story, the movie does at least try to follow some of the smaller details. Things like Sithandra's biomodifcations and the whole eyelashes-and-the-fly scene, but thankfully they cleaned up much of the serious messy stuff, such as the really invasive biomachinery etc.

When I first heard that Charlize had been cast as Aeon, I was unsure that she was a) up to the task, and b) the right 'look'... but oh the wonders never cease, not only did she do the role well, but she did it REALLY well... I think the actress I had picked as the best bet would have been an utter disaster... so I am not going to name her.

However, due to the story change, I was interested to note that Aeon's character was a lot less bitchy and vindictive in this version... which was a big thumbs-up

in my book. The scariest bit was that at times, Charlize looked much more like Alice Krige, famous to sci-fi buffs as every Borg Queen you see... -shudder- it was quite disturbing actually.

With a huge array of stunning toys and weapons still presented, much of it was mechanical over the original concept of bioware... but my favourite single item would have to be the phase-shifting squidthing, followed by the nanoballs from her ring... but the most interesting were the pods on the trees in the Frontier Garden... hehehehe, where can I grow me a defensive system like that!

Overall, a really impressive movie with a lot more going for it in terms of mainstream audience, but the die-hard fans of the original animated series will probably complain bitterly about the total about-face of the whole Aeon vs Trevor Goodchild scenario. As a stand-alone story however, stunning work. Only Trevor's method of reaching the Relico that still eludes me. Aeon's method seems quite effective, though deadly risky... so maybe she should have asked for directions.