The War of the Flowers review 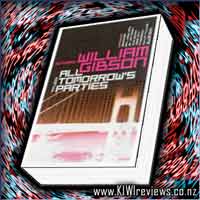 Disclosure StatementFULL DISCLOSURE: A number of units of this product have, at some time, been supplied to KIWIreviews by Penguin Random House or their agents for the purposes of unbiased, independent reviews. No fee was accepted by KIWIreviews or the reviewers themselves - these are genuine, unpaid consumer reviews.
Available:
December 2000

Laney, living on blue cough medicine in a cardboard city, is scanning for nodality, for the future. A future that depends on Rei Toei, the idoru - beautiful girl, virtual icon, post-human being.

Rydell - ex-cop, ex-security for Lucky Dragon convenience stores - is working for Laney, sort of, but he's looking for a future too, and for Chevette, who was once his girl (and is now on the run). And now Rydell's back in San Francisco, back on the Bridge, where it all began, and where it looks like it might all end, possibly with a number of big bangs.

But endings are also beginnings ...

Why Did the Chicken Cross the Road
Rating: 9.9

Ever since I played the old Amiga game Neuromancer, based on William Gibson groundbreaking cyberpunk classic novel, I have really enjoyed the concept of a hyper-advanced virtual-reality-attached world, where there are only 2 classes, those who jack-in, and those who just can't.

In this future, mankind isn't a slave to the system... the system has become way more than any person can understand, it is almost a world unto itself, and it has it's own issues and problems.

This is another tale of life in the world to come, the world of the cyberpunk... the world of the bit, the byte and the virtual. The concepts expressed in this book may be a little difficult for Joe Public to grasp... Gibson's works are targetted towards the cyber-literate, the geeks of the world.

However, if you are in that group, you will find his works to be brilliant examples of what our world could become if technology runs rampant on us. This tale, like all others of it's genre, has more twists and turns than a twisty-turny thing. This keeps your mind firmly engaged trying to untangle the threads, giving a high immersion factor.

Overall, another brilliant example of cyberpunk at it's classical best. Roll on the next novel!

Queenly trinkets for her hair?
A royal pair of underwear?

Poor Prince Pierre and Princess Emma face a major muddlesome dilemma. What do you give your mother the Queen when she has absolutely everything?