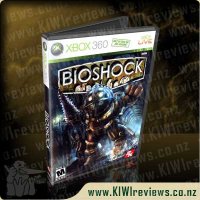 BioShock is a revolution in the shooter genre that will forever change the expectations for the FPS. Going beyond "run and gun corridors," "monster-closet AIs" and static worlds, BioShock creates a living, unique and unpredictable FPS experience. BioShock is the Shooter 2.0.

After your plane crashes into icy uncharted waters, you discover a rusted bathysphere and descend into Rapture, a city hidden beneath the sea. Constructed as an idealistic society for a hand picked group of scientists, artists and industrialists, the idealism is no more. Now the city is littered with corpses, wildly powerful guardians roam the corridors as little girls loot the dead, and genetically mutated citizens ambush you at every turn.

•  Take control of your world by hacking mechanical devices, commandeering security turrets and crafting unique items critical to your very survival.
•  Upgrade your weapons with ionic gels, explosives and toxins to customize them to the enemy and environment.
•  Genetically modify your body through dozens of Plasmid Stations scattered throughout the city, empowering you with fantastic and often grotesque abilities.
•  Explore a living world powered by Ecological A.I., where the inhabitants have interesting and consequential relationships with one another that impact your gameplay experience.
•  Experience truly next generation graphics that vividly illustrate the forlorn art deco city, highlighted by the most detailed and realistic water effects ever developed in a video game.
•  Make meaningful choices and mature decisions, ultimately culminating in the grand question: do you exploit the innocent survivors of Rapture...or save them?

This was an interesting game for me. It was a game that was heavily covered and played by hardcore gamers, so as more of a casual gamer, it was rather intimidating, and I was expecting to have a lot of trouble with it. My fears were largely unfounded however, with a good plot, and an imaginative environment.

A first person shooter, this game is actually more of a strategy and puzzle game, than an action shooter. With an adaptive plot, than can allow you to make decisions that will affect the ending of the game, this game is imaginative, if not overwhelmingly creepy.

There are many customizable parts within this game, from weapons, to your own characters body. Giving yourself some unreal abilities over the elements. This game lends itself more to careful consideration, than running and shooting.Visually, the environment is dark and dank, with a bit of a steampunk style of architecture. A highly enjoyable game with quite an original plot line.

The game was not particularly difficult, as it prefers tactics over shooting skills. And as a result, I managed to complete the game without too much of an issue. I can see why the game was popular enough to spawn two sequels.

Bioshock is a fun and interesting game about the main character Jack who's plane has crashed in to the ocean and in the middle of the ocean is a lighthouse of which he goes to investigate. this light house leads to a underwater city called Rapture.

Rapture was once a civilized city but all has gone to hell, its is the in ruin due for reasons unknown to you. there is a slight problem, its residents have gone insane and are trying to kill you!

The game play is a first person shooter. there are a nice variety of guns to cater to everyone's favourite type. on top of that you have super powers! there are the traditional ones such as fire and lightning up to weird and wonderful ones such as bees. you start to discover this early in the game and progressive earn more as you go.

The story can be very confusing if you are not paying attention but very in depth. one of the scariest enemies in the game are the big daddy's! they are some tough cookies to defeat, but very rewarding to do so.

overall Bioshock is a game that will keep you on your toes and also has a few scares to keep you coming back for more!

BioShock is a rare game, for most of the game you have absolutely no idea who you are or why you're even there.You play a castaway involved in a plane crash. You're in the sea. It's the middle of the night. There's floating burning debris all around you when you see a mysterious structure that just happens to be sticking out of the water with an entrance. So naturally, you head inside to find out what awaits rather than hang about in the cold ocean.

What you find, is Rapture, a crumbling utopia gone very badly wrong. A leaking, decaying, but still recognisably beautiful art Deco-styled outpost where a section of privileged society sought an even better life below the waves. Yet their desire to make things better and better caused only destruction. When you can take the time to enjoy the scenery, Rapture is rather beautiful despite the decay and damage to it.

Game play is wonderful, all the small details put into the game make it feel so realistic. Something as basic as a fire fight with a Splicer is made all the harder, and more real, by the smoke from their gun which can leave you lost in a haze trying to give chase when your vision is blurred. Their handle on death is also new and makes game play feel a lot better. Instead of dying and ending up back at your last checkpoint, you end up regenerated in a nearby pod, saving you many a minute getting back to your last spot.

With a good story line and lovely scenery this is a good game, however I feel it is let down by the fact that I am more enamoured with the scenery than the game play.

Bad omens are all around you! Whether it's black cats walking in front of you, walking under ladders or breaking mirrors, you will want to play your cards smartly to avoid all the back luckâ¦ or risk gathering as much bad luck as possible to pass the curse on to your adversaries and ruin their hands!

And watch out for the âś13thâť cards because they are always bad luck. Friday the 13th is a simple and clever push-your-luck card ... more...