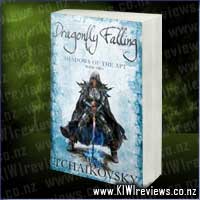 Disclosure StatementFULL DISCLOSURE: A number of units of this product have, at some time, been supplied to KIWIreviews by Macmillan Publishers Ltd or their agents for the purposes of unbiased, independent reviews. No fee was accepted by KIWIreviews or the reviewers themselves - these are genuine, unpaid consumer reviews.
Available:
Febuary 2009

Two young companions, Totho and Salma, arrive at Tark to spy on the menacing Wasp army, but are there mistakenly apprehended as enemy agents. By the time they are freed, the city is already under siege. Over in the imperial capital the young emperor, Alvdan, is becoming captivated by a remarkable slave, the vampiric Uctebri, who claims he knows of magic that can grant eternal life. In Collegium, meanwhile, Stenwold is still trying to persuade the city magnates to take seriously the Wasp Empire's imminent threat to their survival. In a colourful drama involving mass warfare and personal combat, a small group of heroes must stand up against what seems like an unstoppable force. This volume continues the story that so brilliantly unfolded in Empire in Black and Gold - and the action is still non-stop.

With his series, Shadows of the Apt, Adrian Tchaikovsky has created a vast, detailed world, peopled with a wide variety of races that each have their own, unique looks and skills. Inside this place, there is a war coming... a war that will change the face of the 'lowlands' forever.

The interesting thing about this series, which I must admit put me off a little at the beginning, is the way that everyone is associated with different forms of insects - from beetles through to dragonflies, wasps, spiders etc. Yet now, having finished the second book, I find it is one of my favourite things. The races are as unique as aliens in Star Wars or Star Trek, with ancient race hatreds and the scorn of cross breeds, but still capable of joining forces to face a greater enemy, if persuaded by the right people.

I liked that Tchaikovsky uses the grand, sprawling and epic battles and journeys to further the development of the main characters and none of the battle scenes feel like repeats of previous ones. The characters are solid enough to carry even someone who usually detests battle scenes (me). I also appreciate that the main characters have their flaws without being defined by them. Even those that 'turn to the dark side' as it were, still leave me hoping desperately that they will return or make the right decision in the end.

Because of the depth and scale of this book, I very strongly recommend you read Book One: Empire in Black and Gold, before tackling this one, otherwise the insect thing is very confusing and there are far too many characters to get your head around. I suspect that this series would appeal more to male fantasy readers than female (because of the focus on epic war and machines rather than developing relationships) but having said that, there are more than enough awesome female characters to keep me interested, and relationships certainly do feature here and there (often between the lines).

In conclusion, I think that Adrian Tchaikovsky has created a worthy fantasy masterpiece and I can't wait to discover how a war of such huge proportions can possibly be resolved in the final instalment.

The surface of the earth is covered with amazing abstract patterns, many of which can only be seen from above: volcanos and islands for perfect circles, rivers and canyons appear as winding ribbons, fractured sea ice and the cracks on dried-out mud create geometric grids.

These patterns are etched on the earth's crust by water, wind and ice, or are the result of volcanic activity, tectonic forces or seasonal temperature ... more...