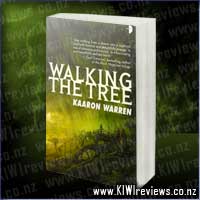 Disclosure StatementFULL DISCLOSURE: A number of units of this product have, at some time, been supplied to KIWIreviews by HarperCollins or their agents for the purposes of unbiased, independent reviews. No fee was accepted by KIWIreviews or the reviewers themselves - these are genuine, unpaid consumer reviews.
Available:
March 2010

An extraordinary island fantasy from the author of Slights. The island is the world, and the centre of the island is the Tree. When they are 18, each person must leave their home and walk the Tree. Years later, when they return - if they return - they will be changed. When Lillah embarks on her own journey, however, she never expected to deviate from the sacred path... and enter the Tree.

Walking the Tree is the story of Lilah, a young woman who is chosen by her village to be a 'teacher', one of the young women who will lead a 'school' of children around the vast tree that is their home on the Island of Botanica. Only women may be teachers and usually, they will stop in a far distant village to marry and raise children. Lilah is not like the others, however. She has a secret to protect and the danger will drive her off the traditional path and force her to face her fears...

If you are a fan of crystal-clear fantasy worlds that have been created with the utmost of love and attention, then this is the book for you. Every village has its own beliefs, customs, skills and specialities. The things these people 'take for granted' such as the tradition of sending their young women away to find a mate elsewhere and keeping their men at home - these things are all so unusual yet completely accepted within Botanica's individual societies.

Because of the attention to detail, I found this book a slightly heavier read than some I am used to. It is much more an exploration of a unique society and world than a plot based adventure. That is not to say that it is without adventure, simply that the world takes precedence over character development and relationships. I did not always agree with the central character, Lilah, and occasionally, she actually annoyed me, yet I couldn't put the book down because I wanted to know what was inside the tree, what the truth about Botanica really was.

Ultimately, my conclusion was that 'Walking the Tree' is a very unusual read but is the sort of world that sticks in your mind long after the characters fade away. Worth a read if you want to be transported for a while.

Score: 10.0
Product reviews for listing 7028: Mark of the Thief
Written by: Jennifer A Nielsen