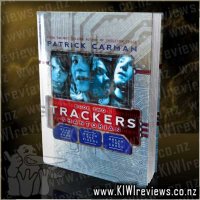 Disclosure StatementFULL DISCLOSURE: A number of units of this product have, at some time, been supplied to KIWIreviews by Scholastic (NZ) or their agents for the purposes of unbiased, independent reviews. No fee was accepted by KIWIreviews or the reviewers themselves - these are genuine, unpaid consumer reviews.
Available:
January 2011

Bestselling author Patrick Carman pushes the vbook to the next level with this thrilling book/video/web experience.

In the 21st century landscape of bits and bytes, everyone leaves a digital footprint... even the most advanced cyber criminals. And that's where the Trackers come in. Four tech-savvy kids armed with high-tech video cameras and esoteric coding skills, the Trackers can find almost anyone, anywhere.

Told through a collage of videos, text, and websites, Trackers #1 follows Adam, Finn, Lewis, and Emily as they become entangled in a high-tech, high-stakes game of cat and mouse with Shantorian, the world's most dangerous hacker. At least, that's who they think they're tracking....

As the four dig deeper into the shadowy world of online crime, they soon learn that things aren't always as they seem.

The "Trackers" series has gone through its first book, but now the author, Patrick Carman, has made a sequel book that brings the "Shantorian" case to a close, for now. When I was given this book I thought that it was going to be a good one, and I was right, with every sentence I became more and more eager to read the rest of it, it was a bit like an inflating balloon, the storyline got better and better, then it ended with a BANG!

I thought that the book was better than the first one for the fact that it had a much more interesting storyline than book one. It had more action, danger, and excitement in it, and I think we all know that these three elements are what makes people buy books. The cover was different as well, instead of a street map, it had a circuit board, which caught my eye even more.

The videos were awesome, one in particular, the second-to-last video had this cool tune in it, you can see this video if you buy the book, go to "www.trackersinterface.com" and type in the second-to-last password in the book and click on "video 8". Speaking of passwords, I like the way that Patrick Carman gave each video a password that was only revealed in the book, so you had to A: buy the book to get the passwords, and B: read the book so you could understand what the videos were about.

My favourite character would be Adam Henderson, I think he's the kind of guy I'd want as a friend for the fact that he is a big computer nerd, and I love computers too, plus he's the main character. My overall opinion on this book is that it is one you are going to want to read over and over again, I know I do. I think the suitable age group for "Trackers Two" is around 8-20 years old because it has some technical stuff that young kids wouldn't understand.

This is a heart-pumping book that will make your stomach churn with excitement and will drag you by the ear all the way to the last page, so get your copy today and let the adventure continue.

A new kind of predator is stalking the Internet, looking for more than an exchange of online intimacies...

A WARNING - Your life is in jeopardy. As you read this, you are within reach of a murderer.

SNOWFLAKE is a psychopathic genius who has found a way of accessing the personal details of other net surfers - of getting face-to-face without their consent. The bulletin board has become a lethal ... more...