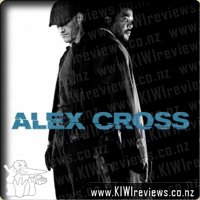 Disclosure StatementFULL DISCLOSURE: A number of units of this product have, at some time, been supplied to KIWIreviews by Hoyts NZ or their agents for the purposes of unbiased, independent reviews. No fee was accepted by KIWIreviews or the reviewers themselves - these are genuine, unpaid consumer reviews.
Available:
in cinemas from Nov 1st 2012

After Washington DC detective Alex Cross watches his wife get murdered as punishment for goading an assassin, he vows to track down the killer. He soon discovers that she was not his first victim and that things are not what they seem.

I am a fan of James Patterson, and certainty some of his books make for great movies - Kiss the Girls being the main one. And I liked the grittiness of the detective Alex Cross. I went to the movies to see this movie in anticipation as I've read the 3rd Cross novel (entitled 'Cross') which this movie was based on: serial killer, action, moral boundaries = typical Patterson.

In terms of the movie itself, it was entertaining but it did not have too much action, which was incredibly surprising for this "action film". The few action scenes that did make it through production were good though (except for the last one where the shaky cinematography was awful!). The biggest highlight was Matthew Fox - he was surprisingly great!

After a very early start and a moderately long day at the Big Boys Toys show in Auckland, I was very much looking forward to stopping in at Hoyts Sylvia Park to see "Alex Cross" - the previews, as expected, looked quite good. It's just a real shame the movie itself didn't live up to the hype. Still, it wasn't the worst I have seen. THAT would have been "Speed Racer", which incidentally starred Matthew Fox as well, but only in the form of a couple of brief face-shots and a lot of voice-overs.

The premise of the movie seems simple enough... cop is chasing bad guy, bad guy kills cop's wife in a public and messy way, cop swears revenge, lots of blood ensues. Pretty straight-forward and hard to stuff up, yet Director Rob Cohen manages to pull of a miracle and make a right hash of it. With extra sub-plots, supposed red herrings that turn out not to be, and some pretty implausible fight scenes... this movie relies more on the implied horror of torture victims and facing down a psycho without any qualms about making you suffer for his entertainment.

The acting was limp at best, stale at worst. Jean Reno - first seen by me as Leon the Professional with a fledgeling starlet named Natalie Portman - was a tremendous disappointment. How far the mighty have fallen! Still... he has grown on a bit since those fine days. So, what redeeming features DID the movie have? To be blunt, the thing that made the movie bearable was the niggling feeling that rewatching it may reveal some hidden layers to it, for surely such a lame-duck movie would not have made it to the global village of hallowed silver screens otherwise?! I will have to wait for it to come out on DVD - not too far off, I feel - to rewatch it and see.

Overall, the best part of the movie after this screening? The amazingly comfortable "La Premiere" seats up the back of the cinema at Hoyts Sylvia Park! Because we (my co-attendee at Big Boys Toys Show earlier in the day) were the only people in the entire cinema, we were invited to use them by a wonderfully helpful lady at the ticket counter.

Alex the Lion (Stiller) is the king of the urban jungle, the main attraction at New York's Central Park Zoo. He and his best friends Marty the Zebra (Rock), Melman the Giraffe (Schwimmer) and Gloria the Hippo (Pinkett Smith) have ... more...