ProdID: 7925 - Jumanji - Welcome to the jungle
Directed by Jake Kasdan 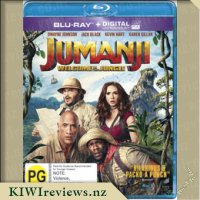 When four high-school kids discover an old video game console with a game they've never heard of - Jumanji - they are immediately drawn into the game's jungle setting, literally becoming the avatars they chose: gamer Spencer becomes a brawny adventurer; football jock Fridge loses (in his words) "the top two feet of his body" and becomes an Einstein; popular girl Bethany becomes a middle-aged male professor; and wallflower Martha becomes a badass warrior.

What they discover is that you don't just play Jumanji-you must survive it. To beat the game and return to the real world, they'll have to go on the most dangerous adventure of their lives, discover what Alan Parrish left 20 years ago, and change the way they think about themselves - or they'll be stuck in the game forever...

I can't tell you how many times I watched the original Jumanji film, it was one of my favourite films growing up and still has a very special place in my childhood. I have, naturally, introduced my kids to the wonder of Jumunji, and we've also all enjoyed Zathura, it's space version, so when we all heard that this was coming out we just couldn't wait to see it. This film takes place years after the first and has a good way of updating to modern times, though I did laugh when a character says 'who plays board games anymore?', we then skip again into the future as we have the usual person vanish. Four kids stuck in detention then find themselves drawn into the world of Jumunji and have to save the day whilst staying alive.

There are plenty of special effects to be had from various jungle creatures to the fight scenes, getaway chase scenes, helicopter ride and more. All flowed well and the special affects made some moments suitably creepy. The characters were really well done, each of the main four actors inside Jumunji do really well, they have a set character type but whilst they're physically adults, they're still teenagers mentally and emotionally, so you have Jack Black playing a stuck up pretty girl in a mans body, Karen Gillian playing an awkward moody teen stuck in a 'pretty' kick ass body, Kevin Hart the school jock stuck in a week short body and Dwayne Johnson as a nerdy, awkward boy stuck in a strong, take charge body. All are believable and create some great comedic moments.

The plot flows well, it's set up like a video game so follows a basic plan and does so well. There are some outlandish moments that happen, but given that it is a video game, it isn't out of place and given that everything is a little over the top it doesn't feel like too much. The character growth works well, given the situations they find themselves in and you can't help but hope that everything works out well for them all. There are reports that there is going to be another film in the series and the kids and I really enjoyed it, we are all looking forward to the next one.

Like many people, Robin Williams holds a very special place in my heart and the original Jumanji is one I consider a classic. I was a little apprehensive watching this one but decided the best approach was to not go in with any preconceived notions and watch it as a movie in its own right. Besides anything else, given it stars Dwayne "The Rock" Johnson so it I figured it couldn't be too bad.

I'm not going to go into the whole plot as I'm pretty sure most people know it by now. With regards to my response to the movie, I'm very pleased to say that I thoroughly enjoyed it and definitely found myself laughing out loud during many parts. Dwayne Johnson does so well in both action and comedy and it was great to see him embracing the comedy role and poking a bit of fun at himself and his traditional action roles! I'm also a massive fan of Karen Gillan and she was brilliant to watch, she does comedy so well, she even pulled off a decent American accent. Jack Black and Kevin Hart are both as usual, on form! The easy chemistry between the co-stars is obvious, it enhances the whole movie is what blooper reels are made for!

The original movie was a lot of fun with funny moments but it also had some darker layers to it. Jumanji: Welcome to the Jungle is straight out fun. This is a movie to watch when you want some light entertainment, it's simple, slapstick type comedy that makes fun of itself and stereotypes but without getting bogged down in deep messages. There are some great little easter eggs throughout, homages to the original movie, but it is not reboot, it is not a remake, it's almost not even a sequel but rather a standalone, top comedy experience. If you want something meaningful, this may not be for you but if you want to laugh out loud, you can't go past this!

I think Robin Williams would have loved it.

I watched the first Jumanji many years ago, and as a Robin Williams fan I was wary about how this version would rate. I am very pleased to say that this is a must see film for 2018. The director Jake Kasdan has done an incredible job of picking the game up twenty years on from the first film, and improving on the story, taking it to the next level. The actors who have been chosen for this are perfect for the characters, and have really embraced their role.

I found all the characters endearing, they were a diverse group who were randomly placed together, and they learned to work with their new bodies, strengths and weaknesses. Jack Black's character is a self-absorbed girl called Bethany, and we see her grow beyond herself, through out the film. The story line flows, and there doesn't seem to be any moments where you are 'waiting' for the next phase of the movie.

This is a movie you can watch with the whole family, although the characters do face danger within the jungle, there is the right balance between exciting and family appropriate. There are some great morals through out this movie: work together, you never know until you try, friend ship is important. But these are woven through naturally, within the story line. I don't want to give away too much, but like every good family movie, there is a happy ending!

The movie is very funny, which is not common in an adventure film, I laughed until I had tears running down my face, and so did all my movie crew. It is one of the few movies that we have laughed at from start to finish! It is definitely a movie that can be enjoyed many times, and will become a cult classic. I have already encouraged several people to watch this, and it has been enjoyed by all!

An alien phenomenon of unprecedented size and power is approaching Earth, destroying everything in its path. The only starship in range is the U.S.S. Enterprise--still in drydock after a major overhaul. As Captain Decker readies his ship and his crew to face this menace, the legendary Admiral James T. Kirk arrives with orders to take command of the Enterprise and intercept the intruder. But it has been three years since Kirk last commanded the Enterprise on its historic five year missionâ¦is he up to the task of saving the Earth?