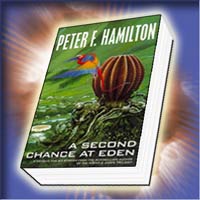 Disclosure StatementFULL DISCLOSURE: A number of units of this product have, at some time, been supplied to KIWIreviews by Macmillan Publishers Ltd or their agents for the purposes of unbiased, independent reviews. No fee was accepted by KIWIreviews or the reviewers themselves - these are genuine, unpaid consumer reviews.
Available:
At Selected Retail Outlets

In 'A Second Chance at Eden', Eden is a bitek habitat which orbits Jupiter. Mining the fusion fuel on which Earth is dependant, it is a mini-nation of radical politics - and even more radical technology. Then its creator is murdered in full view of the whole opulation. But nobody can identify the perpetrator - or the motive.

In 'CandyBuds', the crime-lord Laurus rules Kariwak with an iron fist, jealously guarding control of the bitek trade. But when an astonishing new substance appears on the streets, virtual reality takes on an entirely new dimension.

Plus four other dazzling stories from the bestselling Peter F. Hamilton.

I have always had a 'thing' for the futureimage of a technology being able to 'code from scratch' a creature custom-made to fit a specific purpose. SIMlife for real, for the masses. Buy a pod, plug it in, have a whirl kind of future.

In all my reading, I have never come across a vision as appealing as Peter's 'bitek' - bio-tech, cells meet silicon. You're wired in at the ground floor. I simply loved it!

Overall, quite simply one of the most brilliant books I have read in many years. It has it's place on my Top Shelf.

All the other little ducks had cute little names. There was Wade and Dip and Brook and Bob and even Sludgepuddle. But this little black duck did not have a cute little name. Oh, no! His name was Duck.

All the ducks tease Duck about his name. One day he gets the chance for revenge.

But does he take it?