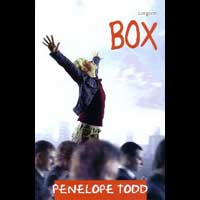 "I sat outside the box and sorted through my backpack; emptied everything and put it back... I did that each morning and it helped me feel real..."

Derik is on the run. Not from the deadly epidemics on the rise in New Zealand, but from the ruling government and its efforts to wipe out disease. The authorities have begun Endorsement: a nation-wide drive to implant a device in every citizen, to regulate body chemistry and control emotions. It's a social experiment the whole world is watching.

But Derik wants to think - and feel - for himself. Trying to find shelter, stay hidden, and keep himself alive, he soon discovers he's not the only one to have turned fugitive.

Box tells the story of massive teenage rebellion against the denials of freedoms. In her latest, riveting novel, Penelope Todd creates a world that could just be days away from our own.

Classified as junior science-fiction for 12-15 year olds, this book would appeal to adults as well. I found it quite catchy and very fast paced and entertaining, with many interesting themes. It was about a society facing compulsory implant programmes and extreme social experimentation, as much as it was as a teenage fugitive survival story.

Set in Dunedin, in a future that could be any time soon, the novel centers around the new Government programme - Endorsement - and three teenagers who reject this compulsory regime.

The Endorsement programme implants are intended to help keep everyone healthy, easily immunised and regulated, but it is an unnatural chemical system that causes unknown ill effects and also lessens emotions. The 'endorsed' have their emotions controlled, and the ability to feel joy, love, hate, the full range of emotions is lessoned... like medicating the whole adult and teenage population with antidepressants.

Derik, Marti, and Disco are the three main characters: teenage fugitives and friends. They are helped to survive by connecting with a previously set up network of adult accomplices. The network provides a cleverly thought out feeding network revolving around time tides, safe houses and coded internet information.
The three main characters are well developed and very likeable, and their relationships and interactions are interesting and very well written.
Later they discover an underground population of teenagers on the run from Endorsement like themselves, and the adventure continues with new plot twists as the unendorsed are isolated from, and denied more and more of society's basic services.

This book is a well-written teenage science fiction novel about suspense, love, friendship, basic survival, free-thinking individuality in society, and conspiracy theories. It is excellent food for thought and a very entertaining and an easily read adventure.