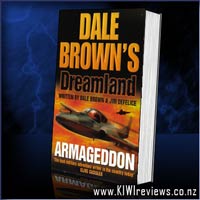 Disclosure StatementFULL DISCLOSURE: A number of units of this product have, at some time, been supplied to KIWIreviews by HarperCollins or their agents for the purposes of unbiased, independent reviews. No fee was accepted by KIWIreviews or the reviewers themselves - these are genuine, unpaid consumer reviews.
Available:
Yes

Whilst relaxing on the beach in Brunei as guests of the Sultan, Dreamland's Breanna and Zen are shot at, and forced to take cover in the water by unknown assailants.

Dreamland are training the Sultan's air force, instructing them on the newest and best aviation technology. But there are those not happy with this alliance.

Suddenly Brunei is under attack from terrorists, and someone somewhere is getting ready for the ultimate revenge.

This book is the sixth in the Dreamland series by Dale Brown, and his best yet. Brown has managed to drag himself out of the hole of repetition he was in with his previous books, where the plots were starting to get a bit repetitive.
Set in the 'paradise' of Brunei, Brown's characters go on a roller coaster through twists and turns all over the countryside. With two members of the DREAMLAND team standing in the way of total world destruction - Armageddon - Jeff 'Zen' Stockard, and Breanna 'Rap' Stockard, DREAMLAND's combat tested, husband and wife team, try their best to survive and stop the rebel take over of the sovereign state of Brunei.
New names were added to the DREAMLAND team, and, sadly, some were deleted off of the character list.
Brown's plot was captivating from the start, trapping the reader in a position where he or she can't put the book down.
This book is definitely value for money, as with the rest of the series, these books make good bookshelf fillers.
I definitely lost track of time with this book, in between relationship difficulties between characters, attempted kidnappings, and sobering combat scenes. Once again Brown was up to par.
I will definitely read this book again but, as I have said in my other reviews, it is almost vital for you to have read the first titles in the series, (Dreamland, Nerve Center, Razor's Edge, Piranha & Strike Zone).
Brown definitely knows how to write a good futuristic thriller, keeping the reader entranced in the world that is DREAMLAND.

Martha is cuckoo about birds, and goes bird spotting in her garden every day. One day she spots a real live dodo, and the two become great friends. Martha wants to keep him secret to protect him. But it's not easy keeping secrets, and she must do some very quick thinking when she accidentally lets her secret slip.