« Night at the Museum : 2 : Battle of the Smithsonian review 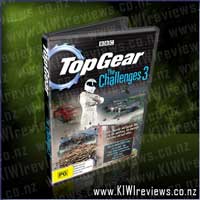 Disclosure StatementFULL DISCLOSURE: A number of units of this product have, at some time, been supplied to KIWIreviews by Roadshow (NZ) Ltd or their agents for the purposes of unbiased, independent reviews. No fee was accepted by KIWIreviews or the reviewers themselves - these are genuine, unpaid consumer reviews.
Available:
November 2009

Our favourite trio take to the road as well as the skies in a new set of gruelling challenges that take the concept of driving to the very limit. They jet off to Japan for the latest in their world-renowned epic races, and have a massive motoring shootout against the Germans when Sabine and her co-hosts are challenged to a contest of driving prowess.

Extras include a feature on the show's cool wall, an extended interview with Boris Johnson, plus an extended Top Gear Awards.

I love Top Gear, I think it's the irreverent humour, and the wonderful dynamic of the three hosts of this wonderfully zany motoring show, a show where the cars almost take a backset to the ongoing antics and friendly rivalry of the hosts.

In this compilation you get eight of the best challenges from the few seasons. These challenges take on a variety of forms, one of these is the classic "Race" challenge where one or more of the hosts compete in a car against some other form of transport. This compilation has what I consider to be one of the best race challenges yet, Jeremy Clarkson in a 2009 Nissan GTR versus James May and Richard Hammond in a Japanese bullet train. The other race challenge is a pack of hunting dogs versus a Daihatsu Terios.

Also included are some of the best producers challenges, like where the presenters try to prove that old Alfa Romeos are proper petrolhead cars by buying cheap Alfas and then being set some challenges by the producers, and where they try to prove that British Leyland made some good cars. Also we have the British Top Gear presenters versus the German Top Gear presenters (and with Jeremy Clarkson involved it's easy to imagine how that's going to go

And then we have the likes of the US racing challenge and the Lorrying Challenge (this one got Jeremy Clarkson in some rather hot water for some of the comments he made during this one!)

And then we get to the DVD extras, such as the Cool Wall - Uncut, and extended interview with Boris Johnson (Current Mayor of London), the extended cut of the Top Gear awards, and my personal favourite a passenger's eye view as The Stig takes some of the best cars from the last few seasons around the famous Top Gear test track.

This is an ideal gift for any Top Gear fan.

Its a small world after all. In this revolutionary new series, David Attenborough reveals the marvellous adaptability of the most successful group of animals on the planet. Using pioneering macroscopic filmmaking techniques, he explores in unparalleled detail the intricate, sophisticated behaviours of these fascinating creatures and the complexity of the environments they build and inhabit, in a world normally hidden from the human ... more...