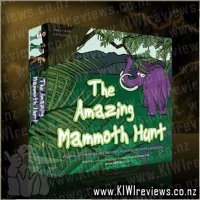 Disclosure StatementFULL DISCLOSURE: A number of units of this product have, at some time, been supplied to KIWIreviews by IQ ideas or their agents for the purposes of unbiased, independent reviews. No fee was accepted by KIWIreviews or the reviewers themselves - these are genuine, unpaid consumer reviews.
Available:
at selected quality retailers

Grab your magnifying glass, it's time to track down a Mammoth!

Travel the globe, encounter amazing animals, and discover exciting places! So make sure your passport is up to date... it's time to sharpen your wits and play!

•  Enjoy some fun family times together for ages 7 to 97!
•  2 games in one for 2-4 players
•  Builds both knowledge and memory skills
•  Perfect for both classroom and home use
•  A beautifully presented game- the perfect gift

My kids and I are big on board games and I had heard many good things about this, so we added it to our collection a couple of years ago, a good addition to the shelf. There are two components to this game, one way to play is a simple trivia game with cards, I would suggest though, that you read all the hints to yourself before questioning the room as sometimes the first clue is what gives it away immediately, I like that the trivia will give a bit more information of various places but it hasn't had any use with my kids, yet. The second part is the board game, your aim is to collect the most points by working out where the various countries are.

The board itself is a good sized, with both words and pictures for each location, which makes it easier for those young ones who can't read yet. It comes with a dice tower, made of cardboard, which was a nice enough idea but ends up being too flimsy and we just got rid of it in the end. The first dozen or so times of play, my mum had a good lead on us, knowing a few more places than my kids and I. However, play it often enough and you will start learning where places are, I now know where some are that she doesn't and every now and then one of my kids (now 11, 9, 7) will find a location and surprise us both.

We've all gotten better at our world geography, though we still get stuck on Africa, and we haven't learnt them all off by heart yet so there is still a few years of entertainment to go.

I had a lot of fun with this game. The Amazing Mammoth Hunt can be played in two different ways and is truly a game "for all the family".

In game number one (the main game) you work your way around the board testing both your geographical knowledge and/or your memory as you seek to uncover the countries that you land on by removing tiles from the game board. Expect the tiles on the easy countries to disappear pretty quickly especially with the balloons that "teleport" you to the destination of your choice, before the more testing countries get picked. There is also a hint system where you can trade Mammoth coins in to get a clue for where a country is (ie which continent it's on) which allows those players with less extensive geographical knowledge the chance still to compete (as noted in the instructions, this isn't always the kids).

Game number two is a trivia game where the idea is to answer as many questions as you can correctly and cover up the countries that the question relates to. By having this second option available it helps expand your geographical knowledge further as you learn where the countries are from the trivia question.

The game also came with a dice tower for rolling the dice. When we played, this soon got abandoned and I felt it was a bit gimmicky. I can see the point of it when playing on an uneven surface like carpet when you don't want to disturb the board, but if like us you are playing the game on a table it soon becomes redundant.

Overall I can definitely recommend this game as one that I would play again and can see me using as my kids get a bit older and can play it themselves. It's the sort of thing that would engage those in the 7-12 age range without losing the interest of the more "grown up" kids.

This is a rather multifunctional game, in more ways than one. On the most basic level, you have two games in the same box - a memory game and a trivia game. Both have strong geography roots, making this an educational as well as fun game.

For those who are weak on their geography, but know a bit about the world, cultures, etc, then playing the 'trivia' game may be your best bet. In this, you have a stack of cards, each one referring to a specific country. Each player reads out some of the trivia, and whoever guesses the country correctly gets to cover up that country on the board with a marker.

For those who are more into geography, the 'memory' game may be more your thing. In this, you start with all the country names covered by counters. You move your player counters around the track ringing the edge of the board, under the control of dice rolls. As you land on a place name, you can try to guess where that country is and lift up the appropriate counter. If you are correct, you get to keep the counter. If you are wrong, you replace the counter. Either way, play then moves to the player CLOCKWISE of you, ie. to your left. Counters are worth 1, 2 or 3 points, and at the end of the game the player with the most POINTS wins the game, crowned the Top Mammoth Hunter.

The game is simple, but very engaging. We had players ranging from 11 years old to 'somewhere around 40' and all were happily engaged in the game. This shows that it can easily be a family passtime that not only entertains, but educates. My biggest -grr- was that the game had chopped Africa up into it's component countries... my biggest relief was that they hadn't done the same with Russia.

In the early stages of the game, expect all players to quickly figure out that to get that early lead, it's best to aim for the Balloon squares - as they allow you to travel to any square you like. A great way to quickly strip away the countries you DO know, leaving the rest of the game to fight and stress over the obscure ones. Personally, I think the game could benefit from pinching the idea of 'travel tickets' from Dragonology whereby travel is limited by the need for tickets. Perhaps it could modify the Mammoth Coins to cover this as well?

Overall, quite a fun little game, and one that even I found educational. I finally learned where Madagascar and The Bahamas were! Yes, I could have found out any time I wanted to, but this was much more fun that a quick Google search!

This was a game that while more simplistic in it's game play than those I'm used to, was one that I still enjoyed very much.

It's a geography based game with 2 parts to it, trivia and guess the location. Therefore anyone would find it enjoyable and at least a little challenging no matter their level of geographical knowledge.

I think the general strategy right off was to aim for the "balloon" squares so that you can choose what country you are going to guess at. It means you can pick off all the easy ones pretty fast (face it, it would be pretty embarrassing to muck up New Zealand!). After that the fun really kicks in sorting out the African and European countries (I may never again forget where Kenya is!).

This is also one that is perfect for kids, a fun way to learn where countries are, far more interesting that listening a boring teacher at the front of the classroom.

The only thing I found disappointing was the dice tower which the game came with. It was a great idea, a way to roll the dice without risking mucking up the board. However being made of flimsy cardboard quickly rendered it looking pretty tatty and we abandoned it very quickly. Nice idea but better quality would be much nicer.

Over all though, this is one we will be adding to our games cupboard.